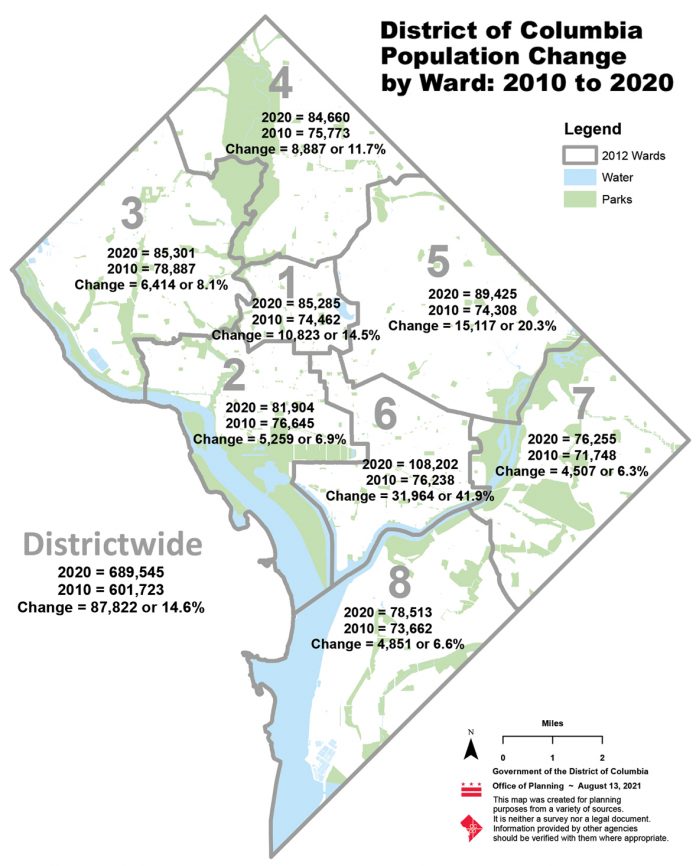 The DC Council’s Redistricting Subcommittee Committee released three draft maps on Nov. 1 in advance of its Nov. 3, Ward 6 hearing. The subcommittee selected the three “discussion” maps from the more than 130 proposals received through the District’s online redistricting mapping tool.

“Our unprecedented 11 hearings on redistricting, the online redistricting mapping tool, and the release of these three “discussion” maps are designed to give our residents the most opportunity possible to understand the law, the choices we need to make to make sure political representation is equal and fair, and to make their voices and opinions heard,” Silverman stated.

Here are the three draft maps examined in detail. 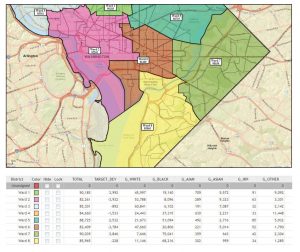 The first draft map moves the border of Ward 8 across the river to encompass the Navy Yard neighborhood bounded on the west by South Capitol St., on the north by I-695 and the Southeast Blvd. ending at the Sousa Bridge and on the south by the Anacostia River. It also extends Ward 7 east of the river with a northern border that follows Benning Rd. NE to 15th St. NE, turns south to Pennsylvania Ave. SE and then heads back east over the Sousa Bridge.

The map makes an additional adjustment on Ward 5’s western border retracting to North Capitol St. and Harewood Rd. NW. This places Washington Hospital Center and the US Soldiers’ and Airmen’s Home squarely in Ward 1. The borders of Wards 3 and 4 remain unchanged. 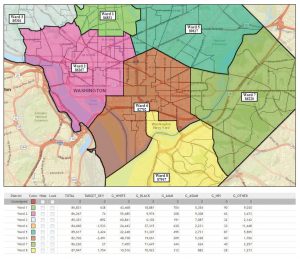 The second draft map moves the western border of Ward 7 west across the river in the same manner as in Map 1. The ward’s southern border with Ward 8 then follows Pennsylvania Ave. SE before taking a turn south on 25th St. SE and finally following Naylor Rd. SE to the District line.

Map 2 also moves a substantial chunk of the Navy Yard to Ward 8. The section is bordered by South Capitol St. on the west. On the north, the demarcation follows I-695 to Third St. SE, heading south to M St. SE and then east to 11th St. SE. This leaves the townhouse communities in Ward 6, while moving the neighborhood’s high-rise apartments to Ward 8. 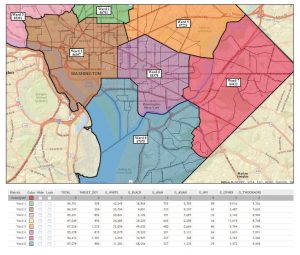 Map 3 moves Southwest to Ward 8. The new Ward 8 borders Ward 2 along 14th St. NW and Independence Ave. SW. The border with Ward 6 begins at Seventh St. SW, follows Independence Ave. SW to Washington Ave. SW, where it heads south along South Capitol St. to the Douglass Bridge. There, it extends north along the Anacostia River to the Sousa Bridge, where it meets Ward 7.

Ward 8’s border with the new Ward 7 snakes from the bridge east along Pennsylvania Ave. SE. It turns south along 25th St. SE and Naylor Rd., then heads west along Alabama Ave. SE. Here, it cuts a jagged line along the edges of Fort Dupont Park and Bruce Ave. SE, until turning east along Suitland Parkway SE to the District Line. The change transfers Skyland, Woodland, Garfield Heights and Knox Hill Dwellings back into Ward 7.

Map 3 pulls the western border of Ward 6 to New York Ave. NW and Seventh St. NW. It then snakes it along Constitution Ave. NW before heading south on Washington Ave., moving The US Capitol completely into the ward. Ward 5 gains a few census tracts along border with Ward 6 near the intersection of New York and New Jersey Ave’s NW. Wards 1, 3 and 4 would remain unchanged.

The District’s Charter fixes the number of wards at eight. The DC Code dictates that the city’s population must be apportioned equally (one person, one vote) among the wards, with no more than a 5% deviation permitted. Dividing the city’s 2020 population (689,545) by eight yields 86,193. To be legal, a redistricting plan must limit the population of each ward to between 81,883 and 90,504.

All three draft maps keep the ward populations with the legal 5% percent deviation. However, that is all they have in common. Map 1 has a 7,924 difference between the populations of its largest and smallest. Map 2 has a similar 6,915 difference. Map 3 has the lowest difference in ward populations at 2,816; and therefore is closest to the ideal of one-person-one-vote.

All the three draft maps create a substantial white population in Ward 8 of between 12 to 13%. This could have implications in future contests for that ward’s council seat.

Ward 8 has historically had the lowest voter turnout in the city, 18.13% in the 2020 Democratic primary, a national contest. In an off-cycle election with the ward’s DC Council seat not at issue, such as the 2018 Democratic primary, turnout can fall as low as 8.31%. Contrast this with Ward 6, whose percentages were 21.91 and 28.29 respectively.

In the 2020 Democratic primary, Councilmember Trayon White (D) coasted to victory with 5,062 votes, while his challengers collectively garnered a mere 3,032. Adding several thousand highly motivated voters, many of them white, to Ward 8’s electorate would certainly alter the election dynamics.

In the end, any redistricting plan has to earn a majority on the three-member committee and then on the 13-member DC Council. Silverman has stated her intention to forge a solution worthy of support from a majority of her colleagues. It remains to be seen what part of Ward 6 will be voted off the island.