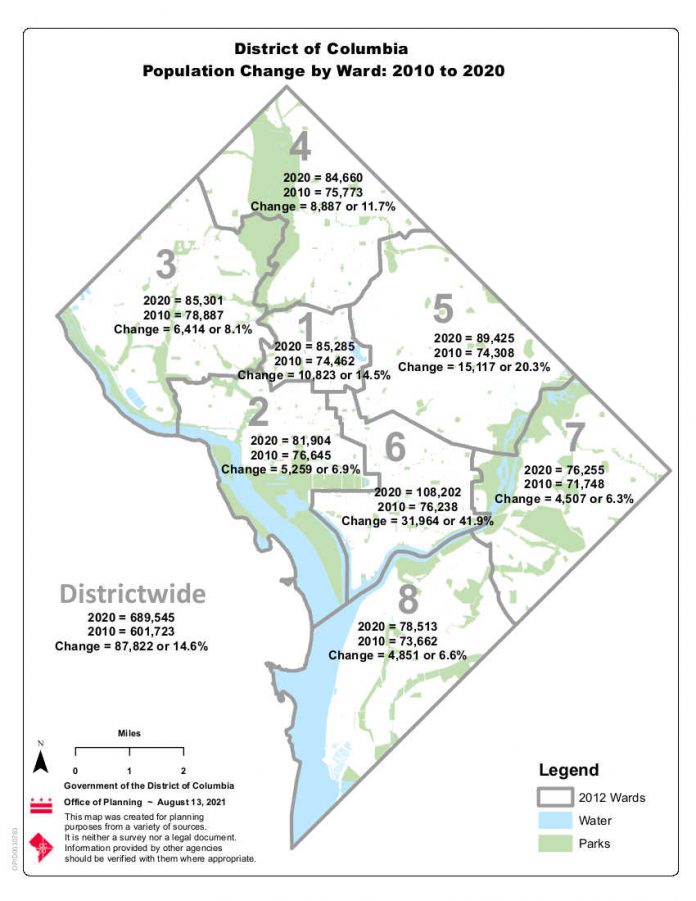 DC Council is gearing up for the start of the often-contentious redistricting process, undertaken by every state (and DC) every ten years. Normally, redistricting begins in April, but a five-month pandemic-related delay in the release of 2020 Census data means the process officially kicked off in September.

The US Census Bureau reported that the population for the District of Columbia was 689,545 persons in 2020. The Council has to make sure each of the eight wards will have a roughly equal population, about 86,193 residents, with a permitted deviation of plus or minus 5 percent. That works out to between 81,883 and 90,503 people in each ward.

Only three of the eight wards currently have populations outside those limits. Wards 7 and 8, with populations of 76,255 and 78,513 respectively, are slightly below the permitted range. On the other hand, Ward 6 has a population of 108,202. That means the ward lines must be redrawn to place at least 17,699 Ward 6 residents in another ward, without pushing any other ward’s population over 90,503.

According to legislation governing the process, in addition to being of relatively equal population, the wards must be “compact and contiguous [touching]” and should conform as much as possible to the boundaries of the US Census tracts. The boundaries must also be in place at least 180 days before the next general election, in November 2022, with ward boundaries to be finalized by the June 2022 primary election.

To conform with the law –and avoid court challenges –the redistricting plan also needs to be above any challenge that it “has the purpose and effect of diluting the voting strength of minority citizens.” There is some debate about whether keeping certain Ward 7 and 8 neighborhoods together is the best way to balance equity with this consideration.

During the redistricting process that followed the 2010 census, Ward 7 was further extended across the Anacostia River, claiming The DC Jail and Reservation 13. At the time, some also argued for Ward 8 to also reach across the river to include portions of Navy Yard, a neighborhood of about 32,000 people, or Southwest, currently home to 14,000, with another 1,000 in Buzzard Point.

DC Council Chairman Phil Mendelson has appointed a Redistricting Subcommittee to direct the Council’s work. It consists of three at-large members: Elissa Silverman, who will chair the subcommittee, Anita Bonds, and Christina Henderson. Silverman has created a one-stop website with all the facts and links to the census data and a new online mapping tool (dcredistricting.esriemcs.com) that allows members of the public to draw their own ward and ANC boundaries using the new Census data.

“Redistricting ensures that residents have an equal voice in our elected government, and this mapping tool now gives the public even more of a say in the process of shifting our ward boundaries to reflect the change in our population,” said committee Chair Elissa Silverman. “My goal is for this to be the most transparent, accessible redistricting process the District of Columbia has ever seen.”

Using data from the 2020 Census, the subcommittee will make recommendations to the full Council on redrawing ward and Advisory Neighborhood Commission (ANC) boundaries to ensure balanced ward populations and representation in the legislature.

The committee will also conduct extensive public hearings, some of which will be held in the most impacted wards.  The first of these was held on Sept. 29.

The Council will consider a wide range of factors when drafting the new ward and ANC lines.  It will look at population levels, age, race, voter turnout, income, education, geographic continuity, and many other data points.

Here is the timeline:

The Council’s final decision, as Chairman Phil Mendelson noted during the 2011 process, will be contentious. There were large protests in Ward 6 just before the first vote in 2011.

The public can participate in the process in multiple ways. First, residents can try to meet redistricting challenges themselves by using a new mapping tool (dcredistricting.esriemcs.com) that allows members of the public to draw their own ward and ANC boundaries using the new Census data, and to submit these maps to the Council subcommittee for consideration.

Residents can also express their views to the Redistricting Subcommittee. The committee will hold hearings on redistricting in each ward from Sept. 29 through late October. Residents can testify before the subcommittee or submit testimony via email or voicemail.

Finally, since each Councilmember will vote on the new ward boundaries, residents can also contact their representative.

Defendants Stranded in Jail By Pandemic