Following a horrific crime where a mother and her child were shot in their front yard, the Ward 6 Core Team of District agencies conducted a walk-through of the area south of Rhode Island Avenue to investigate service deficiencies. Michael Eichler, the advisory neighborhood commissioner for the area, organized neighborhood residents to tell the government what was really needed. He circulated flyers with the heading “Save Our Shaw.”

When the Core Team showed up on the southeast corner of Rhode Island Avenue and 10th Street on the afternoon of May 27, approximately 60 residents were there to exchange views. They formed a circle as the members of the team explained what their agencies could do to improve the situation. Led by Talib Shakir, a Ward 6 liaison from the Mayor’s Office of Community Relations and Services, the District agencies represented on the team included the Metropolitan Police Department, Department of Health, Department of Transportation, Department of Consumer and Regulatory Affairs and Department of Mental Health. There were also representatives from the offices of Ward 2 Councilmember Brooke Pinto and Ward 6 Councilmember Charles Allen.

As the gathering wound down, Commissioner Eichler noted that his canvass of residents had public safety as the number one issue. The last word came from a 10th Street resident who had a message from the father of the victimized family. The father had told him that his wife and son were still recovering and that he appreciated of the support he got from the community. He was also happy to announce that the person who attacked the family had just been arrested.

As the gathering broke up, the Core Team started its walk-through of the neighborhood. They went down 10th Street, east on P Street and back down toward Rhode Island Avenue, ending up at Eighth and Q streets, marking areas that needed attention. Especially visible were the Rodent Control Team personnel, who poisoned all the rat holes that neighborhood residents pointed out.

New Restaurants Springing Up in Shaw

Perhaps the best sign that life in Shaw is returning to normal is the opening of new restaurants. The biggest opening in May was Truluck’s Washington DC (700 K St. NW), the first Washington branch of a chain that has 12 locations nationwide. The corner location takes up 10,000 square feet on two levels, with 400 seats. The contemporary menu stretches from fish to stone crabs to steaks to vegan options.

And a new pop-up is appearing for the summer. Chesapeake Crab Shack and Bar (925 U St. NW), from the team behind Duke’s Grocery and Gogi Yogi, will offer all the signature shellfish dishes. Look for Maryland blue crabs, lobsters, snow crab legs and peel-and-eat shrimp, served with a wide selection of local beers.

Events DC, the manager of the Washington Convention Center, gave an update on its effort to improve the streetscape. Held on the evening of May 10, the meeting started with a brief review of the impact of the pandemic on the convention business. There were 142 events scheduled for FY20 and FY21 at the center, of which 115 were cancelled. It will be well into FY 2022 before big conferences like AUSA, the Washington Auto Show and the Congressional Black Caucus Foundation return to the center.

Meanwhile, the Convention Center is undergoing renovations, both inside and out. It has set up Studio 801, a 19,000-square-foot production studio for virtual events. A new food court, the Uptown Food District, will have a stand for Ben’s Chili Bowl, as well as four other concessions. A new coffeeshop inside the center will be run by La Colombe. There will be a grab-and-go food shop called the Exchange and a Made in DC gift store.

Outside, four kiosks are being built on the 1100 block of the Ninth Street facade. The kiosks, which are 280 square feet each, should be ready for retail build-out in October. Events DC will engage a broker to facilitate leasing the spaces.

Future phases of the streetscape revival call for new planters around the center, new lights to brighten the M Street underpass and eventually a more vibrant rooftop.

The DC Department of Transportation announced that the long-planned, much-debated protected bicycle lane going to downtown will finally be built through Shaw. The plans are for the bidirectional lanes to take up the east side of Ninth Street, going from Florida Avenue all the way downtown. The project had been held up for years due to concerns about its effects on businesses and churches on this major commercial corridor. Ward 1 Councilmember Brianne Nadeau, however, has been a vocal proponent for the protected bikeway. 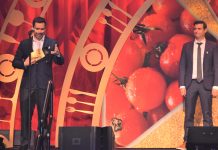 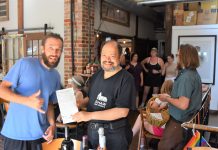 Time To Stand Up in Lafayette Park

The ABC’s of Redistricting