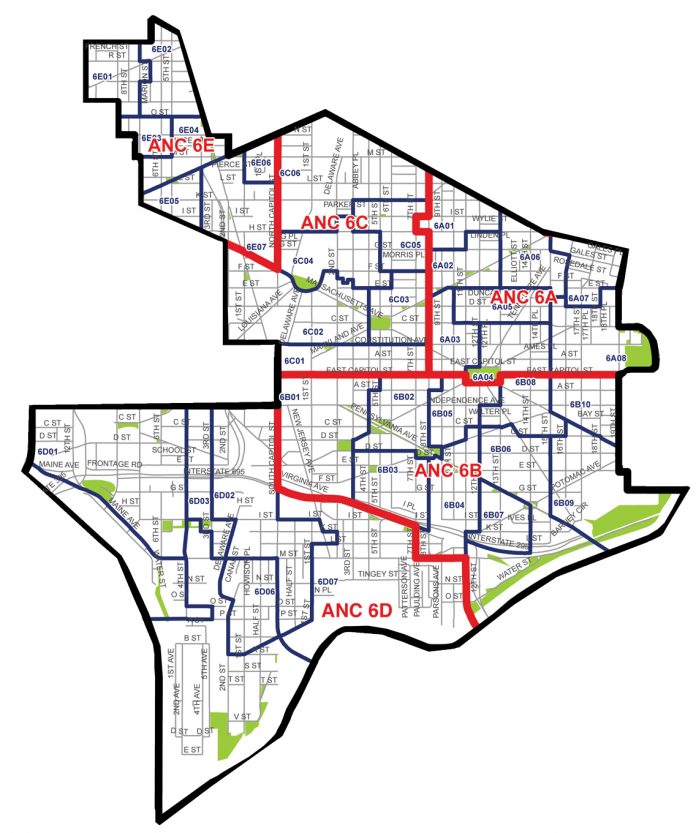 Police Service Area (PSA) Reports
Commissioner Nigro announced that the Third Police District would not give a report at the meeting, due to the occurring disturbances that night.

Captain Jonathan Dorrough of the First District reported a shooting in May at a shelter. Two arrests were made. There was also an incident at the 7-Eleven on K Street. Commissioner Padro asked if the incident at the 7-Eleven was inside or outdoors. When told it was outdoors, he reminded the Commission that he had warned that the installation of outdoor seating would lead to trouble.

Commissioner Nigro asked about a carjacking that ended on Fourth Street. The Captain said that the incident was actually a stolen vehicle that had been left running unoccupied. Commissioner Marriott said that he was happy with the resolution of the 7-Eleven problem. Dorrough said that the company’s corporate office agreed to hire a security officer, a deal worked out by the First District Commander.

924 Fifth Street NW, Playoff Pizza. Commissioner Marriott started the discussion by saying he had held a conference with over 20 residents and a former ANC Chair familiar with the applicant’s other establishments. Marriott thought that he had been able to work out a settlement agreement that would address most issues. The applicant described Playoff Pizza as a sports bar that has sport wagering and allows patrons to play games of skill. He said that it would help to have an additional establishment in the area and that he wanted to run a family-friendly place.

Commissioner Padro said the ABC Committee still had problems with the planned agreement due to a lack of security on the premises. Playoff Pizza would be the first establishment in the area with wagering kiosks making cash payouts. This could create a problem requiring a security guard during all hours of operation. Without an agreement to provide such security, the committee recommended the ANC protest the application.

A participant in the neighborhood discussion of the issue reiterated her concern that enough cash would be exchanged in the establishment that it would present a problem for the community. Marriott added that Playoff Pizza will have security on Friday and Saturday and will establish a cap on gaming payouts. He concluded that the provisions of the agreement were the best terms that the ANC could get. Question: how long before the establishment planned to open? The applicant said that it would be about six months. He also added that before he could install gaming kiosks, he had to provide a security plan.

Marriott made a motion to accept the settlement agreement with Playoff Pizza and drop the Commission’s protest. The motion passed four yeas, one nay, one abstention.

1027 Seventh Street NW. Commissioner Padro started by saying the Establishment, a new restaurant created by the team behind The Dabney, has not given its attorneys authority to negotiate a settlement agreement with the ANC yet. They also did not participate in the ABC Committee meeting the previous  week. They may be reevaluating the application for this license. He said that the issue could be considered next month. Commissioner Nigro said that she had concerns about their initial request for outdoor space and moved to protest the application. Padro amended her motion by adding “peace, order and quiet” as reasons for the protest. The motion passed unanimously.

476 K Street NW, The Cloakroom. The applicant seeks a gaming endorsement to its liquor license. The owner said that part of the application process required the provision of a security plan. The Cloakroom does not plan on having any cash exchanged by gamers. He noted that the Cloakroom already has security personnel posted as part of their normal business. Commissioner Marriott said that he was still looking at the current settlement agreement. He suggested that the commission vote to protest the application. Commissioner Padro said that the date for making a decision was far enough ahead so that the issue could be addressed next month. Marriott made a motion to protest the application. The motion passed unanimously.

1018 Rhode Island Avenue NW, Roasted Boon. A new coffee shop, in a space that had been a liquor store, is asking for a public space permit. The proposal is to put 19 tables in outdoor space previously used as parking. Commissioner Padro suggested that two curb cuts that are currently in the space be taken out, and that the plan add an ADA ramp. Committee Chair Alex Lopez said that the position of the committee was that the businesses should not have to bear the cost of eliminating sidewalk curb cuts. Padro proposed two motions. The first was to approve the Roasted Boon public space application, with the additional provisions of eliminating the curb cuts and adding a ramp for the disabled on 11th Street. The second motion was for the ANC to go on record that DDOT should take responsibility for eliminating the curb cuts.  Both motions were passed unanimously by the Commission.

People’s Counsel Presentation
Mark Williams from the Office of the People’s Counsel, Water Services Division outlined the services his office provides. The division’s mission is to provide legal help for citizens involved in disputes over water services. The emergency legislation passed by the DC Council to address the coronavirus crisis required the division to help customers restore service if it had been cut off due to their accounts being in arrears with DC Water. They hope to help customers continue their service up to six months after the crisis is over. The division also helps people dealing with the Clean Rivers Impervious Area Charge (CRIAC), a fee based on an estimate of a customer’s storm water runoff. Customers can get help with these fees on their water bills, including direct financial assistance. Commissioner Padro asked if the relief program was for both residents and commercial users. Answer: the program assists residential customers of DC Water. A community member asked how long the program would last. Williams said that the program to address the coronavirus crisis expires in August.

Next Meeting
ANC 6E will hold its next meeting on Tuesday, July 7 at 6:30 p.m. Plans are to hold this meeting as a virtual conference. Visit www.anc6e.org for more information.

A’ Is for April and Arbor Day