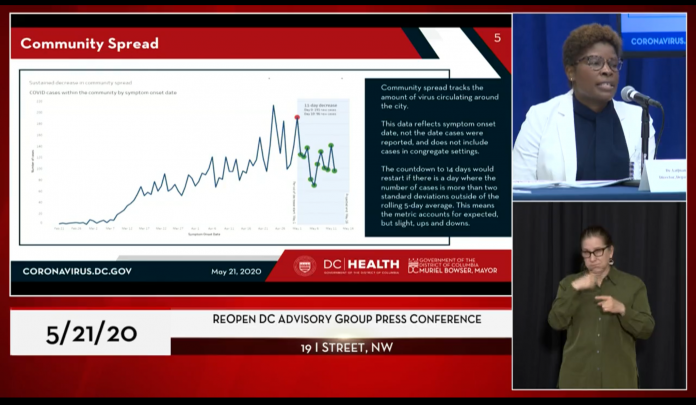 No date has been officially set, but at the May 21 presentation of the recommendations from the ReOpen DC Advisory Group, Mayor Muriel Bowser said the District could enter phase 1 of a reopening as early as Friday, May 29, as long as there are no spikes in COVID-19 rates. Bowser said a formal decision could be made next Tuesday, May 26.

“It is not an on and off switch, We will not be able to go back to our lives as we enjoyed them in February,” the Mayor cautioned, saying that activities would be incrementally added as the situation warranted.

The Mayor made the remarks after she presented the 79-paged report, which lays out recommendations for a four-stage or phased reopening of the District. The report is designed to guide policy and any necessary changes in legislation.

The phases guide reopening in three stages after the stay-at-home order is lifted, and a fourth stage when a vaccine or cure has become widely available.

The District has met two of the necessary benchmarks to lift the stay-at-home order and enter Phase 1, including keeping hospital use below 80 percent and making testing available to priority groups. DC Health has charted a 11-day decline in cases and are looking for 14 days consistent decrease, the Mayor said, adding that the final benchmark, the ability to do contact tracing for all positive cases, should be met by next week, when the first 200 members of the Contact Tracing team will complete their training.

In phase I, gatherings of up to 10 people would be permitted, and parks may be reopened for small groups, but not playgrounds. Travel would still be discouraged. Curbside pick-up would be opened to non-essential businesses, and restaurants could open outdoor seating with physical distancing. Barbers and hair salons could also open by appointment, with occupancy limited to 5 people for every 5,000 square feet.

Swimming pools are unlikely to open until phase III, DC Health Director Laquandra Nesbitt said, because of concerns related to the congregations of people around the pools. The same is true of bars and nightclubs. Summer camps, gyms, and museums could open with limited access in stage II. Groups of 250 people or more, such as at concerts, sporting events, parades or conferences are not recommended until a vaccine is available.

Asked directly about schools, Nesbitt said that the current interpretation of the recommendations is that there may be modifications to in-person learning environments until a vaccine is available. District local Education Agencies (LEAs) are considering several plans. For instance, she said spaces could be modified to encourage social distancing, and teachers could switch between classrooms, rather than students. Students at particular schools could be separated into two groups that alternate days on site. However, Nesbitt emphasized that these ideas are currently in the planning stages. Bowser said that she would say more about education and summer camps on Friday, May 22.

According to the Post, as of May 21 DC is one of only four states still on total lockdown. Delaware, New Jersey and Illinois remain under stay-at-home orders with most businesses closed. Bowser said that the District had discussed the situation with the surrounding counties in Maryland and Virginia and has committed to data sharing with the region. Those counties remain closed, although both states began reopening as of May 15.

The task force did recommend that residents continue what they call ‘universal safeguards’ until a vaccine is found. These safeguards include social distancing and face masks in public spaces, as well as frequent hand-washing and sterilization of services. Vulnerable populations, such as those over 60 years old or with pre-existing conditions, will still need to minimize time in public.

You can see the full report online. https://cdn.flipsnack.com/widget/v2/flipsnackwidget.html?hash=funqraelc&t=&fullscreen=1

A’ Is for April and Arbor Day

Don’t Bring Your Guns to Town