As the weather gets chillier, the days get shorter and the leaves get crunchier, the DC 2019-2020 classical music season opens with an exhilarating array of concerts. The packed schedule of remarkable concerts can be overwhelming, so here are seven performances that stand out because, in addition to the musical prowess of the performers, the programs are constructed to be thought-provoking.

Ensembles ranging from the well-established Emerson String Quartet, founded forty-three years ago, to the Chiarina Chamber Players, founded four years ago, present captivating and technically thrilling programs.  These concerts celebrate female composers, address political conflict and highlight innovative and forgotten musical pioneers. These concerts will both push the boundaries of classical music and celebrate much loved traditions while also introducing some comparatively new ensembles to the DC music scene.

Emerson String Quartet with the Smithsonian Associates: Nov. 7
This November, the much-lauded Emerson Quartet will present a program at the Natural History Museum that includes String Quartet in E-flat Major by Fanny Mendelssohn, a 19th century trail-blazing female composer and pianist who was largely overshadowed by her famous brother, Felix Mendelssohn. Born in 1805 in a time when women were actively excluded from the music world, Fanny Mendelssohn succeeded in writing over four-hundred-and-sixty pieces and is credited for helping edit her brother’s work. The Emerson Quartet performance offers a rare and exciting opportunity to hear her pieces played live.

Gloria! A Baroque Italian Christmas with the Folger Consort: Dec. 13-18
Visit the beautiful St. Mark’s Church to celebrate the holidays with the Folger Consort. This season, the Consort explores women in classical music and this concert features Gloria in D, RV 589 by Antonio Vivaldi.  It will be performed as originally intended: by an all-female choir. The Folger Consort is the ensemble-in-residence of the Folger Shakespeare Library and focuses on early classical music, including pieces from the Medieval, Renaissance, and Baroque periods. Due to the Folger Shakespeare Library’s renovation, this concert’s performances will take place at St. Mark’s Church.

Chiarina Chamber Players present New Paths: Jan. 12
The Chiarina Chamber Players offer a thrilling chance to interact with virtuosic musicians in a welcoming setting. As a new year begins, Chiarina will present an intriguing performance at St. Mark’s Church that dives into composers who have formed “new paths” in the history of music, including Clara Schumann, J. S. Bach, Paul Hindemith, and Johannes Brahms. The National Symphony Orchestra’s concertmaster Nurit Bar-Josef and principal violist Daniel Foster will join artistic directors Carrie Bean Stute and Efi Hackmey at St. Mark’s Church. Cellist Carrie Bean Stute and pianist Efi Hackmey founded the Chiarina Chamber Players in 2015 with the goal of bringing together top-notch musicians and the DC community. This concert explores a fascinating musical subject and is sure to be a treat.

Michael Barenboim and the West Eastern Divan Ensemble at the Kennedy Center: Feb. 27
This concert is poised to be one of the most exciting events of this season because it not only features a group of world-class musicians, but it is a classical group that is driven by a mission for social change. Israeli musician Daniel Barenboim and Palestinian author Edward Said founded the West Eastern Divan Ensemble in 1999 as an alternative way to address the Israeli-Palestinian conflict. The orchestra brings Israelis, Palestinians, and other Arab musicians together to overcome their political and ideological differences through discussion and with the aid of their common love of music. This performance features the chamber formation of the West Eastern Divan Ensemble and will be led by Daniel Barenboim’s son, Michael. Presented by Washington Performing Arts, it will take place at the Kennedy Center’s intimate Terrace Theater and features works by Brahms and Schubert, as well as a commissioned piece by Benjamin Attahir and Mendelssohn’s Octet in E-Flat major, Op. 20.

Women Composer Festival with IN Series: Mar. 6-8
Opera lovers and those interested in the role of women in classical music should check out IN Series’ Women Composer Festival at the GALA Theatre. The weeklong festival will include performances of two operas by living female composers—one is based on Homer’s Odyssey and the other is a family-friendly look at immigration. There will also be multiple cabarets with songs by female composers. IN Series is a DC-based organization that seeks to redefine how race and gender are portrayed in opera and theater. They attempt to diversify the cultural traditions encompassed in opera.

Kronos Quartet with Washington Performing Arts: Mar. 13
At the Lisner Auditorium, the Grammy-winning Kronos Quartet will premiere Sun Rings in DC, a new piece by the iconic American composer Terry Riley scored for string quartet, chorus, and pre-recorded “spacescapes.” The piece explores humanity’s role in space and was commissioned by NASA and other organizations. The world-renowned Kronos Quartet was founded in 1973 and has performed everywhere from California to Italy this season.

Kids!
If you are a classical music enthusiast and want to get your children hooked, there are plenty of opportunities this season. On November 23rd-24th at The REACH, the new extension of the Kennedy Center set to be an inclusive, accessible, and interactive art center, the NSO will perform Peter and Friends as part of their NSO Music For Young Audiences series. It will feature a quintet of woodwind and brass musicians from the NSO, actors, and puppets, and is designed for infants to five-year-olds.

For older kids, The Kennedy Center is hosting a performance titled Girl Power! Celebrating Women in Music, as part of the NSO Family Concert series on February 16th. The concert celebrates the 100th anniversary of the ratification of the 19th amendment, which granted women suffrage, and will have all female composers, conductors and performers.

Spanish Film Icon Comes up with Another Winner 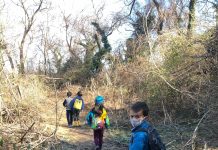