Restaurant Association Metropolitan Washington (RAMW) today announced restaurateur Virginia Ali will be honored with the 2019 Duke Zeibert Capital Achievement Award at a reception on Monday, April 29 at 5 p.m. This is one of the twenty-one awards presented during the RAMMY Awards season and is named in honor of legendary Washington restaurateur Duke Zeibert. The honoree is selected by RAMW’s Executive Committee and recognizes an individual whose hard work and outstanding initiative has increased the profile and success of the metropolitan Washington food service community and dining landscape.

The RAMW Executive Committee has chosen Ali as the 2019 recipient to honor her 60-year career span, dedication and excellence in the restaurant business, unwavering allegiance to her community and industry, steadfast commitment to DC as an iconic restaurateur, and overall philanthropic impact on society as a fearless leader, mentor and matriarch.

As her beloved DC community knows so well, Virginia’s historic destiny found her the day she met Ben Ali, her husband and partner in life, love, family, and business. The dynamic newlyweds opened the doors of the now iconic Ben’s Chili Bowl on August 22, 1958. Today, over 60 years later, the institution has become a place of fond memories for countless guests from DC, Maryland, Virginia, and all around the world.

Known affectionately as “Mom” or Mrs. Ben, Virginia has touched the lives of everyone she has encountered. Although she has achieved near celebrity status, her demeanor has never changed – with all her natural poise and sophistication, she still exemplifies the pure, wholesome values instilled by her parents. She lives a philosophy of giving love and kindness to everyone she meets, and as a result she is cherished and respected in a way that is very rare these days. In fact, at this point she is considered the “Matriarch of U Street” and countless DC residents call her “Mom.”

In addition to all the hours she has put in at Ben’s Chili Bowl, Virginia has also made time for many other meaningful endeavors. She has served on the Board of Directors of For Love of Children, The Thurgood Marshall Center for Service and Heritage, the Islamic Society of the Greater Washington Area, and Cultural Tourism DC, among others.

Over the years, Virginia and Ben have received countless awards and accolades including the prestigious America’s Classics Restaurant Award from the James Beard Foundation. They were inducted into the DC Hall of Fame in 2002, and later given the Key to the City by former DC Mayor Adrian Fenty. More recently, the Smithsonian placed Ben’s Chili Bowl on its list of the 20 Most Iconic Food Destinations Across America. 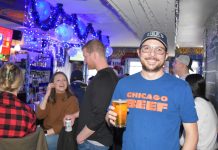