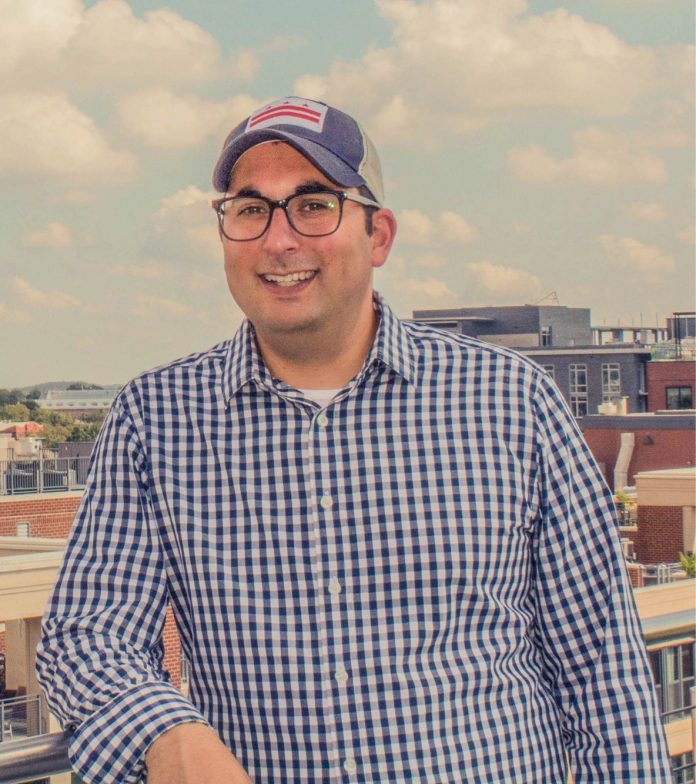 Out at a cocktail party one evening, Michael Bekesha found himself deep in conversation with another partygoer. Their discussions ranged over all the major issues that have divided the country so deeply. At the end of their exchange, the woman, a Democrat, thanked him for their frank exchange of views, he recalls.

The woman had not spoken to a Republican in years.

This is the story Bekesha offers as explanation for his decision to run for local office. A supporter of choice, marriage equality, gun control and DC Statehood, he is not your garden variety Republican.

Accusing the Democratic-dominated DC Council of “groupthink,” Bekesha wants to bring a new perspective to governing the District that unites Democrats and Republicans. This dapper candidate is now walking the streets of Ward 6, knocking on doors to spread word of his challenge to Democratic, incumbent Ward 6 Councilmember Charles Allen.

Journey to The District
Son of a public school teacher and small businessman, 37-year-old Bekesha enjoyed a middle class childhood in Framingham, Massachusetts. He learned the rewards of hard work assisting his father in his business. While his father always voted independently, his mother was a solid liberal Democrat.

Bekesha approach to life was powerfully shaped by events of the spring of his senior year. His father’s oldest friend was diagnosed with terminal cancer. So, rather than spending the last days of high school celebrating, he spent his weekends commuting an hour to pitch in at the friend’s clothing business. He worked in the warehouse and did the books. “I said one Sunday, ‘See you next week.’ That week never came,” Bekesha recalls. Witnessing the impact of the friend’s death on his parents taught him the fragility of life and the value of friendship.

Leaving the East Coast, Bekesha attended college at Northwestern University. To this day, he remains an enthusiastic alumnus. In fact, he met his wife, a staunch liberal Democrat, through his active engagement in the DC alumni club of which he was president for several years. He graduated in 2004 with a degree in political science.

After college, Bekesha decided to explore the legal world. He moved to Chicago to work as a litigation project assistant at Sidley Austin LLP in their commercial litigation practice. Bekesha fell in love with the legal world, deciding to pursue a law degree.

“I like to argue and love to analyze facts,” Bekesha says.

In 2006, Bekesha began law school at the University of Missouri. While studying, he interned at local firms. He also spent seven months during his third year interning with Judicial Watch Inc. (JW), a Republican think tank in DC.

Graduating in 2009, Bekesha returned to JW as a staff attorney. At the nonprofit, he specialized in Freedom of Information (FOIA) litigation, filing dozens of lawsuits on behalf of conservative organizations and journalists. He has written several briefs and filed petitions for writs of certiorari at the US Supreme Court.

A self-proclaimed “transparency nerd,” Bekesha is perhaps best known for his dogged pursuit of Secretary of State Hillary Clinton’s emails. On behalf of Judicial Watch, he sued to release all electronic correspondence transmitted through Clinton’s private server to the public.

“I am the only person I know who has read all of Clinton’s emails. She is very funny and personable in her emails. Had the American public seen that side of her, she probably would have won the election,” he observes.

On the local level, while personally a supporter of Obamacare, Bekesha (on behalf of a Judicial Watch client) challenged the District’s policy allowing Congressional employees to purchase on the DC small business exchange while forbidding access by businesses with more than 50 employees. The lawsuit was dismissed for lack of standing.

Bekesha will begin a leave of absence from JD on Oct. 12 to pursue his campaign for the council. He has pledged to serve full time if elected.

Bekesha is a proud resident of the Capitol Riverfront. A diehard Nats fan, he loves walking to the ballpark. While he and his wife do not have children yet, they are devoted to their rescue beagle. They can often be found dining at dog friendly patios at Yards Park or The Wharf.

A Different Point of View
When District politicians assembled last March in front of the Wilson Building to dedicate an eight foot bronze of Mayor Marry Barry, Bekesha objected. Pointing to the burgeoning “Me Too” movement, he argued that District should not glorify a known abuser of women. Not a popular position in a city where many still venerate “The Mayor for Life” and politicians make a point of whether they are “native Washingtonians.”

When the DC Council bestowed $82.4 million dollar Tax Increment Financing on Union Market for a parking structure, Bekesha called their actions fiscally irresponsible give-away to developers. More importantly, the city, he argues, should not use the public’s monies to subsidize automobiles. Rather, the future, he argues, lies in Metro, ride sharing and bicycle transportation. It seems he is a bit of a transportation geek.

It is this diversity of thought that Bekesha wishes to bring to the DC Council, largely dominated by liberal and progressive Democrats. He is campaigning on a three-pronged platform of public safety, infrastructure and education.

Public Safety
Bekesha attributes the recent rise in homicides to the flooding of the District with illegal weapons. Not a Second Amendment absolutist, Bekesha wants the Metropolitan Police Department (MPD) to focus on illegal gun seizures. The key to facilitating this, he believes, is to recruit more residents as officers, since only 15 percent of the force currently resides in the District. Local officers, as a matter of course, have closer relationships with the public, which facilitates trust and the sharing of information. He would like to increase funding for programs that assist first responders who want to live in the District with home financing and rent subsidies.

Bekesha is strong opponent of so-called “stop and frisk” policing, which he says is both ineffective and undermines public trust. He also advocates the decriminalization of indoor sex work for the same reasons. This policy moves sex work off the streets where it is a public nuisance and thereby reduces violence. Most importantly, he said, it removes any fear of arrest from victims of sex trafficking, which makes it easier for them to go to the police for aid.

Infrastucture
“Infrastructure” is the second element of Bekesha’s platform. He is strong advocate for the development of alternative and public forms of transportation rather than automobiles.

“We are going to have a million residents. We need to have a big picture, major overhaul of transportation. How are workers who labor past Metro hours getting to and from work?” he says.

Bekesha wants the city to build dedicated, protected bike lanes and use the public curbside to make ridesharing services more easily available. To this end, he is a strong supporter of having a lighter municipal tax on shared rides for Uber and Lyft. He wants to look at the efficacy of congestion pricing on private vehicles and urges experimentation with so-called micro shared transit.

To facilitate the unclogging of the city roadways, Bekesha strongly advocates an expansion of parking enforcement to a 24-hour, 365-day operation. This will free up the curbside, he says.

Education
Education is the final plank in Bekesha’s platform. He strongly supports mayoral control of the schools. However, he faults the council, and At-Large Councilmember David Grosso (I) in particular, for its oversight of the school system. “The system only works when the council does its job,” he says. While Bekesha supports local public schools, he is sensitive to the needs of parents.

“Lots of parents are saying we’d love to send our kids to the local neighborhood school, but we don’t think it is strong enough. So, we look elsewhere,” he says.

Charters for those individuals, Bekesha believes, provide needed choices. However, there needs to be an overarching body that sets policy and coordinates capacity for both charters and traditional public schools. He wants to establish an independent research consortium to analyze the District educational system much like that adopted in Chicago, which is run by a local university and both privately and publicly funded.

Most importantly, Bekesha says, principals need to be empowered. They should be hired on multi rather than a single year contracts, which is the current practice. As important, funding for at-risk students, he believes, should be allocated directly to schools under the discretion of their principals.

This fall may be the year of the “Blue Wave.” Republicans are clearly a tiny minority in Ward 6. Still, Bekesha invites Democrats to overlook their fury at the White House to give his candidacy careful consideration. Some may find his track record as a tenacious attorney, his transportation nerdiness and his social liberalism a compelling alternative to the council’s general progressive bent.

For more on Republican Michael Bekesha, visit www.bekesha2018.com. On Nov. 6, voters in Ward 6 can chose between Bekesha and the Democratic candidate, incumbent Ward 6 Councilmember Charles Allen. Both candidates will debate at a forum sponsored by the Hill Rag, Ward 6 Democrats and the DC Republicans on Oct. 12 at 7 p.m. at the Hill Center, 921 Pennsylvania Ave. SE.