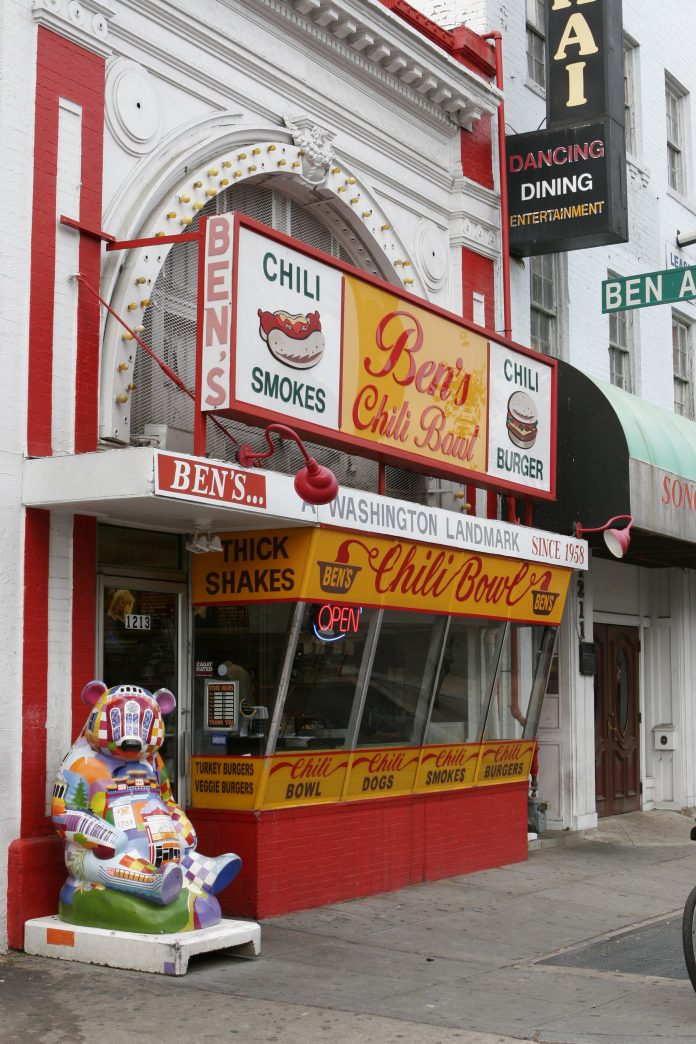 On Aug. 22 this year, Ben’s Chili Bowl turned 60. But it was not just a birthday for Ben’s. It was a celebration of DC’s African-American history, culture and character – a celebration of our city’s resilience.

DC’s people have a long history of bouncing back from hard times. Our black community is front and center in this story, and Ben’s is a perfect case study of our quest of freedom and its ongoing redefinition.

Many of DC’s early black residents had freed themselves from bondage in the slave states of Virginia and Maryland, from whose land Congress created the enslaved District of Columbia in 1791. Each decade thereafter, more blacks got free.

In 1800, 20 percent of blacks were free in DC. By 1830, 50 percent. DC was becoming a precarious “safe-haven” for runaway slaves, hiding in free black communities in Georgetown, Foggy Bottom and Southwest, from slave-catchers and kidnappers as far away as Georgia.

DC’s black men fought and died in the Civil War. They are honored on U Street at the African American Civil War Memorial and Museum. In 1867, black men here became the first in America to vote, while Howard University opened its doors the same year. A year later, Barry Farm in Anacostia became America’s largest freedmen’s village, settled by those fleeing a slave South during the Civil War. Over 25,000 African-Americans flooded into DC, where black churches, schools, businesses and social venues gave people of African descent a semblance of liberty and the pursuit of happiness. DC was on its way to becoming a “city of magnificent intentions” and becoming chocolate in color, socially sweet and politically potent.

Anchored by Howard University, DC produced America’s “best and brightest” during the rise of oppressive black codes and Jim Crow. When PhDs, MDs, DDs, DDSs, JDs and men and women of arts and letters and business acumen graduated from Howard, they did not return to the violent South from whence they came. They stayed in DC to cultivate their new talents building our city as America’s black mecca.

DC emerged as the premier city for black excellence. The Howard Theatre opened in 1910 at Seventh and T streets NW. The 1940s brought five major theaters up and down the U Street Corridor, known as America’s black Broadway, a phrase created by Pearl Bailey at the Casbah Club, now Ben’s Next Door. Twelve beauty salons and barbershops lined U Street. Over 200 black businesses bustled in the Shaw-Cardozo-LeDroit Park area. The black dollar circulated and stayed in the segregated black community. Wealth and community building followed.

A successful black working and professional class had disposable income enough to finance large churches, schools and vibrant cultural venues including Griffith Stadium where Josh Gibson hit baseballs out of the park onto Georgia Avenue, making him the all-time home run hitter, at 962. Barry Bonds is number two at 762. Hank Aaron number three at 755.

Before the Harlem Renaissance, it was the DC Renaissance that gave birth to that dynamic community north of Central Park. The Apollo Theater in Harlem opened in 1932, 22 years after the Howard, and capitalized on “Amateur Night,” started at the Howard in the 19-teens. Most of the Harlem greats came from U Street, Howard University or the Shaw community.

But not only the black intelligentsia built the mecca. Laborers, line cooks, lower- and middle-grade government workers, nurses, clerks, choir members, teachers, postal employees, domestics and shopkeepers all contributed to a vibrant, highly diverse black community, where a Howard professor lived next to a construction worker, conversing freely about arts, culture, sports and the ongoing drama in civil rights struggles. Their diverse colors matched their diverse interests and points of view with a healthy appreciation that they were all equal in the eyes of Jim Crow. Barbershops, beauty salons and Bible studies hummed with humor and philosophical musings.

Fast forward to the mid-1950s, and DC became the first major American majority-black city, Chocolate City, a moniker from a song by George Clinton of Parliament-Funkadelic in 1971. Clinton, aka the godfather of funk, reveled in DC’s being a 72-percent black city, where black excellence and progress was the envy of people of African descent worldwide.

It was an inviting destination for African-Americans fleeing a hostile South during the Great Migration. By 1960, we became the first major American city with a black voting majority. There was no stopping black progress, by the early 1960s, when civil rights leaders in the Student Non-Violent Coordinating Committee (SNCC) and the Southern Christian Leadership Conference (SCLC) opened their offices across the street from Ben’s Chili Bowl, and down the street, respectively. In 1967, Dr. Martin Luther King Jr. established his Poor People’s Campaign headquarters around the corner from Ben’s at 14th and T streets. Ben’s already showed its commitment to the community by feeding organizers of the 1963 March on Washington, the civil right movement through the 60s and the Poor People’s Campaign in 1967-68.

But then tragedy struck on April 4. The King of Peace was assassinated. All Hades broke loose. Ben’s was the only business permitted to stay open during four days of federally imposed curfew, because community leaders and government officials jointly needed a place to eat, meet and quell the rebellion.

Fire, anger and death were loosened on America’s black mecca. Blocks were burned out along 14th, Seventh, U and H streets NE. Darkness fell on the lights of the black Broadway. People and businesses fled. Few ventured on U Street thereafter. As if to pour salt on this open wound, drugs, crime and violence followed in the 80s. It was dark and dangerous just to walk down the street. But the late 80s proved even more devastating. Metro construction opened a 60-foot canyon along U Street for five long, dusty, dirty years. You could not even walk down U Street, literally. You had to enter Ben’s from the back alley. Still it stayed open. Still people came to eat and meet.

Those once bustling black businesses became shuttered. By mid-1990s, only five had survived the 1968 onslaught: Prince Hall Black Masons, Industrial Bank, Lee’s Florist & Card Shop, Howard Theatre (sporadically) and Ben’s. They stayed open heroically. They survived. Now they thrive. Today, those everyday people who stayed and persevered struggle to stay in the mecca they built. Honor them. Let us keep them here!

A wise person once said, “The only thing we can depend on is change.” Change is, paradoxically, our constant friend. So here we are, 60 years later. Chocolate City has become Chocolate-Vanilla Swirl, soon becoming Mocha-Melt.

But Chuck Brown Way and Duke Ellington’s statue sing a silver note at Seventh and T streets NW – ground zero for black DC, where atop the Howard Theatre Louis Armstrong blows his cornet, speaking to God.

Ben’s hums as a destination. Activists in mayoral campaigns, from Jesse Jackson for President in ’84 and ’88, to Black Lives Matters, environmentalists and #Me2 leaders, use Ben’s as a meeting and organizing space. Even our Metropolitan Police Department uses Ben’s as a training site for recruits, teaching them about the history of policing in DC, where U Street was a contentious space as police brutality was being countered by a young upstart named Marion Barry in 1969.

U Street is back. We remember.

It took enormous character to survive 227 years of slavery, the black codes, Jim Crow, lynching, mass-incarceration, micro and macro aggressions in a white-supremacist, racist America. This is DC’s history, culture and proud sense of resilience. This is our character. Today, our history is on brick walls along U Street for the world to see in murals painted by young hip artists. Take a stroll down U Street from Fifth to 15th, marveling at our resilience. Our story is spray-painted on the walls.

Celebrating Ben’s on Aug. 22 was not simply saying happy birthday to Ben’s. It was saying “thank you” to those businesses, people, smiles and struggles along U Street in the Shaw, Cardozo and LeDroit Park communities, full of churches, Victorian homes and schools, who held firm to the idea of black excellence. Aug. 22 was also, prophetically, the birthday of the Howard Theatre and the indomitable Chuck Brown.

Happy birthday, Ben’s, and thanks, black mecca of America. Not gone. Not forgotten.

Bernard Demczuk, PhD, is the Ben’s Historian and chair of Ben’s Foundation. He can be contacted at bernie@benschilibowl.com.