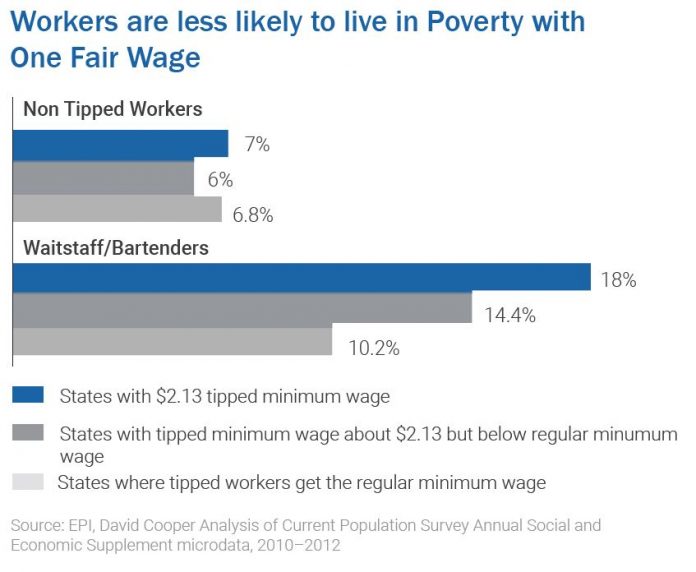 At the end of June, DC residents voted for tipped workers to be paid one fair wage. Initiative 77, approved by 56 percent of DC voters, will increase the tipped minimum wage until it reaches $15 an hour in 2026. Under the current law, employers only pay tipped workers a “tipped minimum wage” — $3.89 an hour, and are supposed to make up the difference if the wage falls below the full minimum wage of $13.25 per hour when tips are included. Initiative 77 gradually eliminates the two-tiered wage system by requiring employers to pay all workers the full minimum wage by 2026.

Tipped workers—predominantly women—experience a poverty rate nearly twice that of other workers. People of color, who make up 66 percent of servers in the District, are often tipped less than white workers. With the current two-tiered wage model, tipped workers are subject to patrons’ biases and a complicated system that allows employers to underpay their workers.

Living on tips does not provide sufficient, predictable income or economic security. According to the Economic Policy Institute, average wages for tipped workers are nearly 40 percent lower than for all workers. Currently, the annual median wage for bartenders and servers is approximately $31,000 and $25,000, respectively. The MIT Living Wage Calculator, which considers regional costs of living, estimates that in DC a worker with two children must make $32.50 per hour, or $68,000 annually, to adequately provide for her family — more than twice what a bartender makes.

With one fair wage, DC’s roughly 30,000 tipped workers will have a higher base wage, plus tips from patrons. Workers will no longer rely on customers for their wages, and tips will fill their intended purpose—a token of gratuity from a satisfied patron.

Since 2000, DC’s leisure and hospitality industry grew by 56 percent and is the second-fastest-growing sector in the city. This reflects a burgeoning restaurant scene that continues to add jobs. However, for these jobs to put DC residents on a path to the middle class, they must pay living wages. Contrary to restaurant industry claims, Initiative 77 would provide workers with a higher base wage plus tips from patrons—a system that will lead to higher total earnings for tipped workers.

One fair wage is good for workers and the city as a whole. By voting yes on Initiative 77, DC residents have voted for predictable incomes, higher wages, and greater economic security for tipped workers in the District. Workers will no longer rely on tips for their income, and employers will be responsible for paying workers a full minimum wage.

Seven of DC’s thirteen councilmembers introduced a bill to repeal Initiative 77, despite voters’ overwhelming support of it. When council recess ends, there will be a public hearing at which DC residents, businesses, and government representatives can share their thoughts on what has been proposed. The Council will then vote on the bill.

But the people have already voted. Like in all places, elections in DC are important—they allow residents to voice what’s important to them and take action to shape their community. Initiative 77 was supported by a strong majority of DC residents, including majorities in all wards, except Ward 3. Policymakers should respect the will of their constituents, and the evidence from other states, and commit to implementing Initiative 77 as passed.

Brittany Alston is the workforce policy analyst at The DC Fiscal Policy Institute. DCFPI promotes budget and policy solutions to reduce poverty and inequality in the District of Columbia and increase opportunities for residents to build a better future.