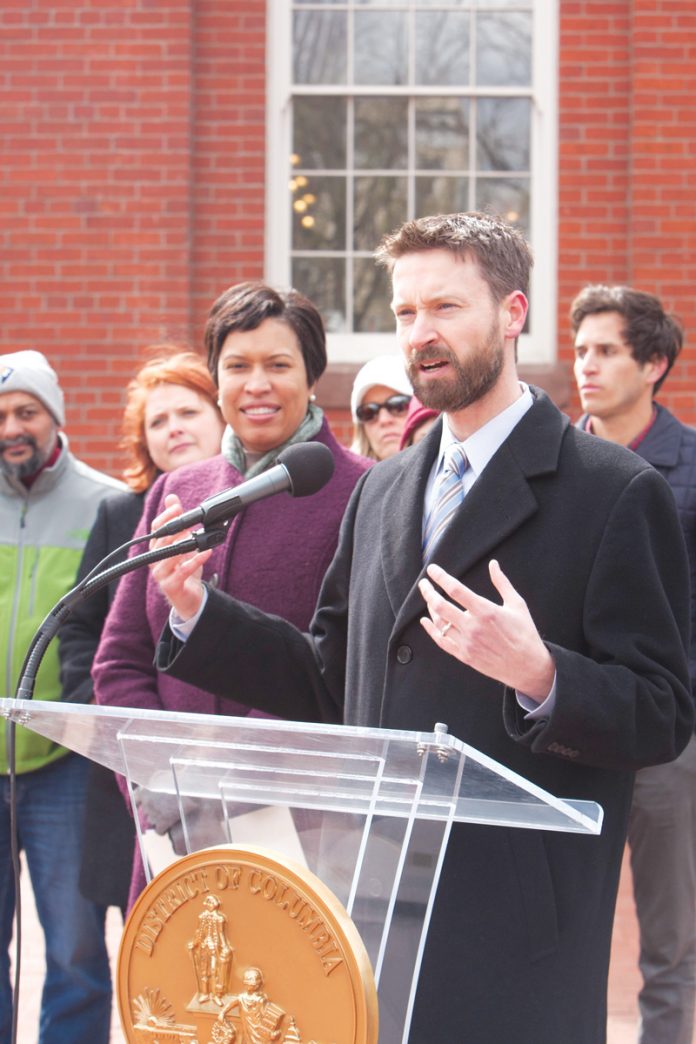 It is 1995. A tall, clean-cut young man stands at a pay phone in rural northeast Alabama. Charles Allen has had a roadside breakdown, two hours into a 10-hour drive to visit Washington and Lee University, his future alma mater. In a pre-cellular era, he has just walked two miles to a filling station to call his parents for assistance. Frustrated and tired, seriously considering giving up on the whole trip, Allen is both figuratively and literally standing at a crossroads.

Moving forward nearly a quarter century, Allen, now Ward 6’s elected councilmember, is still that same tall figure despite the gray now edging his beard. Chairing an oversight hearing at the DC Council, he shepherds a disparate crew of government officials, advocates and community members through the proceedings. He is a poised presence on the dais.

How did a young man from Alabama become such a consummate elected official?

Homewood, Alabama
Born in 1977, Allen grew up in Homewood, a mostly white, middle-class suburb of Birmingham. His father, an attorney, was a solo practitioner. The family was comfortable but not wealthy. His mother worked evening retail to pay the bills. As the elder of two brothers, Allen waited up for her return, a habit so ingrained that he remains a night owl to this day.

An Eagle Scout and diligent student, Allen worked his way through high school. In the summers, he traveled as a school locker repairman. With an eye on medical school, he became a surgical assistant in a local hospital. Allen attended thousands of operations, later becoming an emergency medical technician. “Seriously. I’ve done spinal surgery, appendectomies, hip and knee replacements, bowel removals and much more. I’m good in a crisis,” he recalls with a laugh.

Leaving Home
In his senior year, Allen applied to Auburn University, his father’s and uncle’s alma mater. He also applied to Washington and Lee in Lexington, Va., an expensive private institution that appeared financially out of reach until Allen’s mother, convinced that Washington and Lee was the right school, implored Allen to visit. He got in his beater and set out.

Later that day at the filling station, Allen was feeding change into the payphone, prepared to call the whole trip off. His mother, however, told him to stay put while she and his father drove up with a replacement car. Allen finally arrived in Lexington in the wee hours of the morning, and immediately fell in love with the school. Between his family’s scrimping, his own savings and the addition of student loans, Allen managed to attend for a pivotal four years.

College: A Fork in The Road
Allen arrived at Washington and Lee in 1995, a smart, but apolitical pre-med. Along with many of his contemporaries, he was largely ignorant of the conflicted racial history of his hometown, a subject completely ignored in the high school curriculum. An intensive class in his sophomore year entitled “Malcolm and Martin,” taught by a charismatic professor, changed his life.

Allen had never read about the bombing of the 16th Street Baptist Church or the Southern Christian Leadership Conference’s Birmingham campaign. Here were events that had occurred within walking distance of his home. Suddenly, Allen had to confront what Alabama’s foremost troubadours, The Drive-By-Truckers, have called “the duality of the Southern thing.”

Returning home, Allen made a pilgrimage to the historic localities that he had studied. He asked his parents, friends and relatives about their memories of the civil rights era. At school, while continuing the pre-med track, he added a concentration in poverty studies. As part of the courses he spent a summer working in a free clinic in Dorchester, Mass. The experience demonstrated the breadth of health problems facing the less fortunate. Believing he needed to make a larger difference, Allen abandoned medicine in favor of a career in public health.

From Policy to Politics
After graduating in 1999, Allen matriculated in the School of Public Health at the University of Alabama to pursue a master’s degree. While in school, he worked for a nonprofit focused on the health of uninsured residents in neighboring Jefferson County. Graduating in 2001, he moved to the District to take a postgraduate fellowship at the US Department of Health and Human Services (HHS).

There Allen worked on strengthening primary health clinics through provider recruitment. He became policy director at the DC Primary Care Association (DCPCA), where he worked on the expansion of DC Medicaid and the creation of the DC Healthcare Alliance. At DCPCA he helped create the DC Health Professional Loan Repayment Program, which provides medical professionals to underserved areas in the city, and the DC Captive Insurance Company, which provides affordable medical malpractice insurance to free clinics.

“That first year in DC helped me really understand that it matters greatly not just to have the right policy but have the right people in the office for that policy,” recalls Allen.

At HHS, Allen spent a lot of time arguing policy positions, and up on the Hill at hearings. He became fascinated by Sen. Paul Wellstone (D-Minn.). “This is someone I find to be on the right side of so many issues,” Allen explains. When a friend sent him a solicitation to work in the waning days of Wellstone’s 2002 Senate reelection campaign, he volunteered the following morning. Later that day, Wellstone and his family were killed in a plane crash.

Allen flew out to work for Walter Mondale, who had stepped into Wellstone’s place on the ballot. He was thrown into the middle of a get-out-the-vote effort, spending time door knocking, going to rallies and calling voters.

“We lost. It was one of the most gut-wrenching experiences of my life. Standing at his campaign headquarters after the election, I was just sobbing,” Allen says.

Allen returned, determined to remain active politically. He joined friends to form DC for Dean (DCD) to support Howard Dean’s presidential bid. Together, they built a substantial grassroots organization that won the District for their candidate and, in time, morphed into DC for Democracy. As part of this organization, as well as on his own, Allen has volunteered on political campaigns ever since.

At the bar after the event, Allen and Wells shared a drink. “Remind me again, you’re from Alabama?” said Wells.

Turns out, Wells had grown up three blocks from Allen’s home, 20 years previously. They shared a high school and a church. They had even been taught by the same social studies teacher. The two men found they shared an interest in public health and left-of-center politics. Despite Wells’ affinity for University of Alabama’s Crimson Tide, and Allen’s allegiance to Auburn, they became friends and political allies. (Football in Alabama is like religion.) In 2002, Allen moved to Ward 6. He met his wife Jordi Hutchinson. They bought a home on the northeast side of Capitol Hill, where they live with their two children.

When Wells ran for the Ward 6 council seat in 2006, he asked Allen to manage his campaign. After the election, Allen joined the new councilmember as his chief of staff. These were momentous years for the ward, the city and Allen.

Allen worked behind the scenes to move Wells’ “livable-walkable” agenda. They had an early victory with the 2010 law that imposed a five-cent fee on plastic bags to fund the cleanup of the Anacostia River. Allen shepherded the two-year rebuilding of H Street’s streetscape, often joking that he was its unpaid project manager. He also helped Wells ensure that the city rebuilt the Eastern Market after its devastating 2007 fire.

Stepping into Larger Shoes
When Wells ran for mayor unsuccessfully in 2014, Allen threw his hat into the Council race. He won the Democratic primary with 58.16 percent of the vote after a hard-fought campaign, then romped to an easy victory in the general election. He was sworn in in 2015.

Allen successfully moved legislation to provide books at government expense to all small children in the District, the so-called Books from Birth bill, designed to close the achievement gap by getting youngsters ready for the classroom. On the other end of life’s spectrum, Allen’s legislation established the Safe at Home program, which provides grants enabling older residents to make modifications to help them age in place.

His legislation Made in DC, promoting DC businesses, also passed. Allen was an important part of the Council coalition that raised the minimum wage and enshrined family leave in the face of significant mayoral opposition. Working with colleagues, he restored money required for middle-school modernization that somehow had been dropped out of the mayoral budget.

No politician gets elected for championing local homeless shelters, but when Mayor Bowser (D) announced her program to replace DC General with a set of small, geographically dispersed family shelters, Allen supported the concept, while working with Council Chair Phil Mendelson (D) to refashion the initiative into a practical plan that made sense for Ward 6. He and his staff sat through countless community and agency meetings. The result was a design for a facility in Southwest, now under construction, which one neighbor likened to a boutique hotel.

Allen was able to preserve space at the Southwest shelter site for the return of a highly valued community medical clinic. In return for his support, he extracted a public commitment from Mayor Bowser for a “build first” approach to the renovation of nearby Greenleaf Gardens that would protect public housing residents against displacement.

During the current legislative session, Mendelson appointed Allen chair of the Council’s Committee on the Judiciary and Public Safety. Working with colleagues, he secured the passage of a major reform of the Youth Rehabilitation Act. Then, in the face of considerable mayoral opposition, he moved legislation that established public campaign financing. He also led his colleagues in the passage of the Defending Access to Woman’s Health Care Services Amendment, which protects women’s right to choose in the face of congressional efforts to roll back Obamacare.

This year, Allen stands for reelection. He faces a Democratic opponent in the primary scheduled for June 19 and a Republican challenger in the November general election.

Allen has traveled a long way from that lonely filling station. Yet, in his carriage and mien, one can still glimpse the young Eagle Scout who left home determined to make a difference.