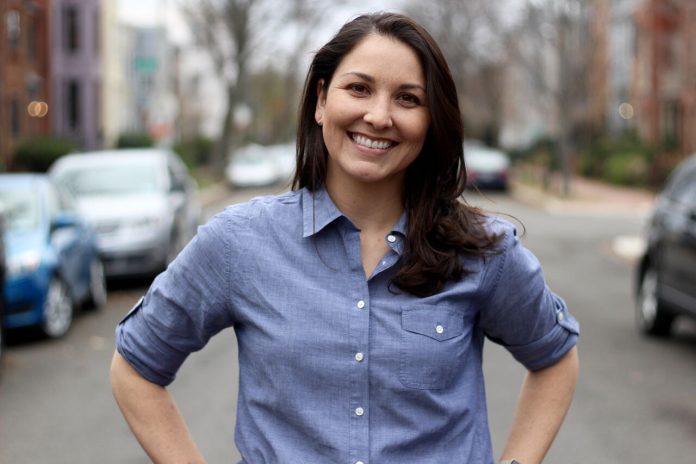 In a dusty field outside a village in Guyana, an athletic young woman dribbles a soccer ball. Just out of college, she is a Peace Corps volunteer teaching in a local school. Soon, she is joined by a sea of men, young and old. When an impromptu game starts, Lisa Hunter has crossed a cultural divide to make a new set of friends.

“My cleats and soccer ball were my most useful social tools,” Hunter said recalling her service abroad.

Now Hunter is using those social skills to connect with the voters of Ward 6 as she runs against incumbent Councilmember Charles Allen (D).

Early Life
Daughter of two attorneys, Hunter grew up in Malibu, Calif. While her father worked on matters of public interest, her mother defended workers as a labor lawyer. Civic questions and social responsibility were dinner-table conversation.

Bilingual, Hunter spent a great deal of time in Arizona with her mother’s extended Mexican American family, which had lived in the area since before incorporation into the United States. “The border crossed us rather than us crossing the border,” Hunter observed wryly. She learned firsthand about the impact of immigration raids and deportations on her neighbors. This injustice needed to be righted, she believed. Heading to attend Vassar College, Hunter thought her future lay in the practice of immigration law.

At Vassar, Hunter continued her athletics, playing competitive soccer. She graduated in 2007 with a degree in anthropology. Three days later, Hunter was on a plane to her Peace Corps posting in Guyana.

Life in Guyana was a huge culture shock. Hunter taught literacy to primary students during the day and built connections playing soccer in the evenings. Aside from teaching, she helped erect a greenhouse for people living with HIV/AIDS. She also developed workshops for village teachers designed to prevent child abuse and HIV infection. Hunter still maintains ties to her friends and host family in Guyana.

Yes, We Can!
In the summer of 2008, Hunter returned home, no job in hand. She quickly threw herself into the Obama campaign. Starting as an intern, she helped manage workers in its Chicago headquarters. Recognizing her talent, the campaign promoted her to deputy field organizer.

Hunter was dispatched to manage the 20 volunteers in one of the St. Louis field offices, running daily canvassing, office staffing and phone banks. She worked mostly in the barrio, where her bilingual skills were much in demand.

The Obama campaign changed Hunter’s life. Canvassing introduced her to the many difficult issues facing society’s disadvantaged and discarded. “I met lots of wonderful people,” she recalled.

Abandoning the idea of law school, Hunter followed Obama to Washington, determined to find a place in the administration to help the folks she had met in St. Louis.

In the fall, Hunter went to work for newly elected Rep. Judy Chu as a congressional staff assistant. She helped set up Chu’s DC office, assisted the legislative staff with communications and worked on constituent services.

In summer 2010, Hunter joined the Obama administration in the US Department of Health and Human Services (HHS) as special assistant to the assistant secretary for legislation. This was a policy job focused on the Affordable Care Act (ACA), HIV/AIDS, minority health disparities, woman’s health and drug shortages. She worked on congressional testimony, secretarial briefing materials and regulatory issues.

Hunter moved to the Office of the Secretary in 2012 as a special assistant. There she continued her policy and communications work. She matriculated in Georgetown’s master’s program in public policy, which she completed in spring 2014. By then she had left the administration for the private sector. She became a director at Avalere Health, a healthcare company offering advice and analysis on best practices and regulatory compliance. Supervising a team of 10, she advised associations and nonprofits on ACA regulations, coverage expansion and market reforms. She also drafted communications for the firm’s regulatory newsletters.

Hunter left Avalere this past April to campaign fulltime for the Ward 6 Council seat held by Charles Allen.

Capitol Hill Life
Hunter lived on the Hill while working in Congress, but in 2010, after meeting her future husband, Ian Hunter, she relocated to Logan Circle. The couple moved to the Hill a year or so later, purchasing the home they now occupy with their daughter. Hunter’s parents also moved to the neighborhood just blocks away. The couple run and bike together and spend weekends walking the dog in Congressional Cemetery, visiting museums, cooking and yard work or home improvement projects.

Homeownership and childrearing led Hunter to refocus her political interest from the national to the local stage. She became frustrated with her interactions with the city administration on issues like rat abatement and the posting of parking enforcement signs that she thought targeted Latin-speaking construction workers. Dissatisfaction with her councilmember’s constituent services and a desire to represent the views of neighbors struggling to keep up with the rapid pace of gentrification moved Hunter to challenge Allen for his seat.

Hunter’s Platform
Hunter sees a lack of compassion on the DC Council. Motivated by a keen sense of equity, she is running on three issues: housing security, fair living wages and campaign finance reform.

The key to affordable housing, in Hunter’s opinion, is increasing the number of available units and maintaining the city’s existing stock. She strongly supports raising the city’s contribution to the Housing Production Trust Fund. The monies for this can be secured by reversing the estate tax reductions and increasing corporate taxes, she believes.

Hunter opposed recent changes to the Tenant Right to Purchase Act (TOPA) that removed single-family homes from the law’s purview. She believes that it should have maintained protections for longtime tenants.

Recognizing the strong connection between homelessness and domestic violence, she supports the opening of mini shelters for women and families. Criticizing recent measures that demand proof of residency for shelter applicants as onerous, Hunter would have the city recognize the homeless as a legally protected class.

The provision of fair living wages is the second plank of Hunter’s program. She supports increasing the minimum wage beyond $15. She is an advocate also of the ballot initiative to increase the tipped minimum wage and of taking more measures against wage theft. If the public were made aware of the poor wages earned in the restaurant industry, she argues, they would strongly support these measures. “The Council needs to lead on this issue,” she declared.

Third, Hunter wants increased campaign finance transparency. After observing the extent to which campaign funding can influence the city’s elected leadership and skyline, she has concluded that greater transparency “is a commonsense method of tracking shady money in our current finance system.” When individuals contribute, she argues, they should be required to disclose their corporate connections, job title, any lobbying registration and employment. In her view, this kind of information, now being mandated in other cities, should be publicly available in DC.

While Hunter may have traveled far from Guyana and her West Coast roots, she honors them in her commitment to social justice, equity and equality. While she may have temporarily hung up her cleats and put away her ball, she is still forging connections to improve the world around her.