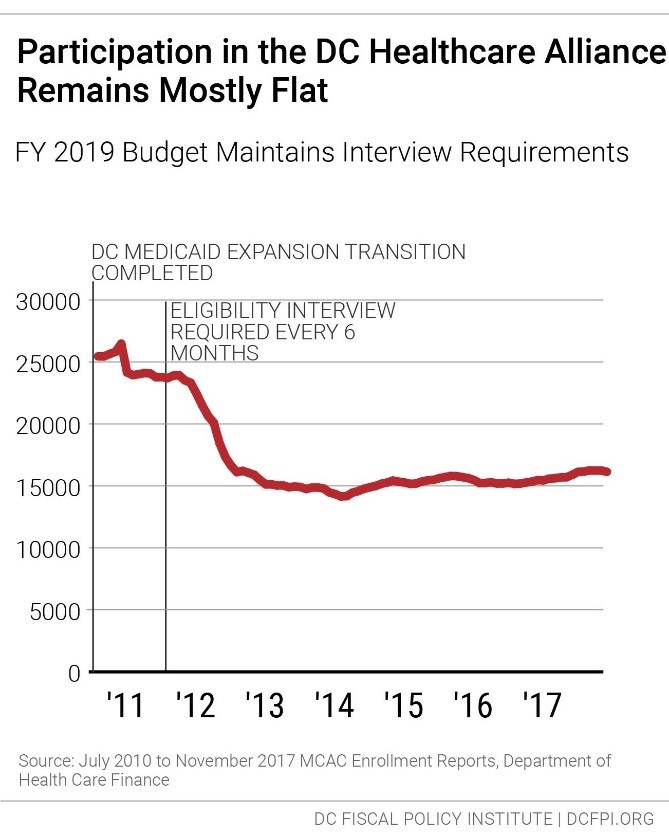 In a time of great turmoil for immigrant families across the country, it is more important than ever that DC be a welcoming and inclusive community. Yet DC’s healthcare program for immigrants, the DC Healthcare Alliance, is shutting out thousands of eligible residents with onerous requirements – forcing beneficiaries to line up before dawn at service centers twice a year, while their US-citizen neighbors apply for Medicaid annually through an online portal.

The DC Council has passed two laws that would fix this inequity, but without funding for either law in the budget for the coming year, many residents will continue to face barriers to accessing the care they need.

The DC Healthcare Alliance program is a locally funded program that has long served residents with low incomes. In 2010, the Affordable Care Act (ACA) permitted DC to move many alliance participants to Medicaid, allowing the city to leverage new federal funds through the ACA that became available for healthcare. Because of that shift, the alliance program now primarily serves residents who are not eligible for Medicaid, Medicare or subsidies on DC Health Link, including undocumented immigrants and documented immigrants who have not yet met the five-year waiting period for federal benefits.

While the DC Healthcare Alliance plays a critical role in ensuring access to care, program rules implemented in 2011 have made it hard for eligible residents to maintain their coverage and access crucial health services like checkups and immunizations. In October 2011, the District began requiring all participants to have face-to-face interviews every six months at a DC social service center to maintain coverage in the alliance. In contrast, residents with Medicaid coverage only need to renew every 12 months and can do so online if they choose.

The new requirements led to a sharp drop in enrollment. During the first year of the policy, from October 2011 to October 2012, the number of residents in the alliance dropped by one-third, from 24,000 to 16,000 (see figure). Enrollment has fluctuated modestly since then but currently stands around 16,000, despite continued growth in the District’s population.

The six-month re-enrollment requirement has been an enormous obstacle for eligible residents. Workers with limited access to childcare and full-time work find it difficult to complete the frequent-interview requirement. Beyond that, many families are forced to make multiple trips because of a lack of language assistance, long lines and delays in staff processing of information. Often, beneficiaries must go several times to finish the re-enrollment. Even for those who do secure coverage, 44 percent lose coverage after the first six months. That’s thousands of individuals who are not receiving regular care.

These barriers are particularly painful for immigrant residents, who are grappling with hostile federal policies that make accessing public benefits a fearful, intimidating process.

The District strives to be a welcoming city for immigrants, but it is difficult to encourage use of programs, like the alliance, when additional barriers are imposed. Some applicants have described the enrollment process as confusing, intimidating, discriminatory and inflexible.

Two pieces of legislation passed by the DC Council have sought to ease this barrier. One allows alliance beneficiaries to re-apply for the program over the phone, and the other allows beneficiaries to re-apply just once a year – and at community health centers, where people often feel more comfortable. Together, these could increase the number of people covered by 1,600-6,000 enrollees.

While both bills were passed unanimously into law in 2017, they were not accounted for in the proposed fiscal year 2019 budget. Unless the Council includes them by the time the budget is finalized this month, the laws cannot go into effect.

When people have health insurance, they can more regularly manage their health needs and focus on other things like their families, education or jobs. For the District to be a place where health insurance is universally accessible, we must make it easier for eligible residents to apply for and maintain their alliance benefit. The recommended changes to the program would ensure that residents not only have access to healthcare but can keep their coverage. We hope the DC Council will fund these changes in the fiscal year 2019 budget and continue its commitment toward healthcare for all.

Jodi Kwarciany is a policy analyst at the DC Fiscal Policy Institute (www.dcfpi.org). DCFPI promotes budget and policy solutions to reduce poverty and inequality in the District of Columbia and to increase opportunities for residents to build a better future.