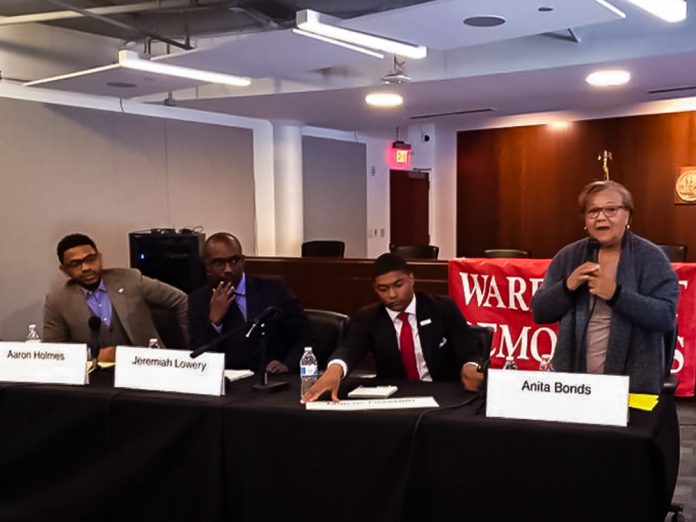 There is little light between incumbent At-Large DC Councilmember Anita Bonds and the three millennial African-American male professionals – Aaron Holmes, Jeremiah Lowery and Marcus Goodwin – hoping to unseat her in the Democratic primary on June 19. During interviews and at candidates’ forums, they have all agreed that the primary issues facing the District are affordable housing, economic development, gentrification, government accountability and quality public education.

“We need more oversight of our schools,” said Goodwin. Major scandals have rocked public education in DC over the past several months, including evidence that some students graduated high school in 2017 without meeting the requisite attendance and academic requirements. It also has been disclosed that funds appropriated to help at-risk students have been spent in unrelated areas.

“We’re not doing adequate follow-up,” echoed Bonds, a member of the DC Council’s Committee on Education and Libraries. When challenged by me about the disconnect between her criticism and the role she plays on the committee, she said there were limits to what she could do; she is not the chair.

“The problem is not mayoral control; it is whether we are giving our children a culturally responsive curriculum,” argued Holmes. “We have to move from the idea that we need to repair our children. I believe we have to empower our young people.

“Change is a verb,” he added

Fighting for Advantage
Despite his eloquence, Holmes may not be on the ballot in June. The DC Board of Elections and Ethics (DCBOE) has upheld a challenge by Lowery to the validity of signatures on Holmes’s nominating petitions. According to elections officials, Holmes was 153 short of the required 2,000 signatures.

Lowery told me he filed the protest as a strategic move. “With a smaller field, it makes the race more competitive. I have nothing against Aaron. In fact, I consider him a friend of mine,” said Lowery.

Holmes argued the DCBOE should not have accepted the challenge. He has filed an appeal in the DC Court of Appeals. “The Board of Elections’ own regulations, which have the force of law, require that challengers provide the names of the voters whose signatures are supposedly invalid. The challenger in this case did not do so. By allowing the challenge to stand, the Board of Elections essentially held me to a higher standard than other candidates,” Holmes declared in a prepared statement. Until the court decision, he said he will “continue knocking on doors and getting my message out to voters.”

Rachel Coll, DCBOE spokesperson, said that “the board does not comment on pending litigation.” In its ruling, however, the DCBOE seemed to agree there were problems with the challenge, but asserted that the “board may, for good cause shown, waive any of the provisions … if, in the judgement of the board, the waiver will not prejudice the rights of any party and is otherwise not prohibited by law.”

Holmes said there could be no greater prejudice than the fact that he may not appear on the ballot for the June primary.

Shared Biographies
Holmes and the other candidates have roots in the District’s predominantly African-American communities. He is a Ward 8 resident, making a second bid for office. In 2016, the 34-year-old ran for the Ward 8 Council seat against incumbent LaRuby May. Trayon White subsequently defeated May.

Brash and as confident as the other opponents, Holmes graduated from Oxon Hill High School in Maryland. His father is a police officer. His mother is a nurse. Holmes’s claim to fame may be his MyPD program, which brings police officers into city schools. He said he wants to create a strong bond between officers and the people they serve. He also has advocated for the DC government to directly construct affordable housing rather than rely, as it does, on the private sector.

Lowery said his mother spent a portion of her life homeless or in foster care. His father, who had a job as a security guard, often took him and his siblings to work. His two brothers became involved in the drug trade and are now in prison. He credits the community for “standing with him” and helping him make it through the University of Maryland, College Park.

In 2016, he was appointed to the DC Food Policy Council. Lowery currently works with the Chesapeake Climate Action Network. He has pushed for creating a clean energy environment and has focused on ending evictions in the city. He has also advocated for “build first,” a process that would reduce the displacement of existing residents at apartments or public housing complexes slated for redevelopment.

Goodwin’s said that during his childhood he traveled between his mother’s house in Ward 1 and his father’s house in Ward 8. His mother is a teacher and his father an environmental scientist. Goodwin is the fifth of eight children, all named for well-known Pan-Africanists; he is named for Marcus Garvey. Goodwin went to St Alban’s High School and graduated from the University of Pennsylvania. A real estate professional, who currently owns a home in Ward 4, Goodwin said he intends “to win all eight wards.”

“I want to be 100-percent respectful,” the 28-year-old told me. “[But] we need contemporary solutions to contemporary problems. Campaigning and governing are two totally different things. Councilmember Bonds is a great campaigner. The city needs new ideas, new innovation and new leaders. “

No Easy Roll
Beating Bonds won’t be an easy feat. She has been part of DC’s body politick since the late 1970s. She helped Marion Barry move from community activist to DC councilmember and then mayor. She was the keeper of his political machine, serving during off season as his director of community affairs, and then jumping out of that government job to shore up his subsequent elections. She also served in the cabinet of Mayors Sharon Pratt and Anthony Williams.

Unsurprisingly, Bonds became the chair of the Democratic State Committee, which critics have described as weak and ineffective. She persuaded members to appoint her in 2012 to the DC Council to complete Phil Mendelson’s term as at-large member after he became chair.

In 2014, Bonds was elected to a full four-year term. In the Democratic primary, she won 43,586 out of the 81,859 votes cast. In addition to sitting on the Education Committee, she is a member of the Committee on Business and Economic Development and the Committee on the Judiciary and Public Safety.

It’s as chair of the Committee on Housing and Community Development that she has made her mark over the past three years. She has controlled a broad swath of territory including various commissions – Advisory Neighborhood Commissions, the Commission on Women, the Latino Community Development, for example. She also oversees the Office on Aging; seniors are a reliable voting bloc.

Bonds said she has worked hard responding to the needs of residents, particularly the most vulnerable. However, “The city’s not right yet. We have a distance to go.”

Searching for Differences
No greater challenge faces the city than breaking the affordable housing nut. DC has spent millions of dollars on preserving or constructing low-cost housing. The effort has resulted in mixed reviews. The DC Auditor found that some Housing Production Trust Fund monies have been used for administrative salaries, not housing. The city also has been slow to use a program created two decades ago giving it authority to take control of properties and redevelop them itself or effect development in partnership with local for-profit or nonprofit companies.

“I want to focus my first 100 days on making sure that everyone in the District of Columbia can afford to live in their community,” said Goodwin. He is concerned about the paucity of apartment units for large families. He has singled out support for redevelopment of Barry Farm, a public housing complex in Ward 8. A DC Superior Court judge last month ordered the city’s zoning commission review its decision around granting approval for housing density at the site. That could put a temporary halt to the project and enable activists to negotiate terms that would allow more of the current residents to remain there.

Opponents chastised Bonds for pushing through legislation that stripped renters in single-family homes of their rights under the Tenants Opportunity to Purchase Act (TOPA). “There needed to be reform to TOPA but not that reform,” said Goodwin.

Lowery also has accused Bonds of refusing to move legislation in committee because it could adversely affect the business community. That legislation, proposed by Bonds, would provide radical reforms for rent control. Among other things it would adjust downward the amount landlords could increase rent on occupied apartments. It also would reduce from 30 percent to 10 percent the increase landlords could make to the rent on a unit after it becomes vacant.

It’s baffling that Bonds would stymie the legislation. “She just wanted to have it on the [campaign] circular,” said Lowery, adding that doing so would allow Bonds to take credit for the introduction without taking any action.

“I am not going to respond to that charge,” Bonds told me. “Like any other legislation, you try to move it out of committee when you have the votes.”

She admitted that the Department of Housing and Community Development had a difficult time getting revved up, accounting for some of the management problems associated with the trust fund. “I’m comfortable that Polly [Donaldson] has settled in and is putting in place some safeguards.” Bonds said she has begun to be more focused on housing preservation and pushing for the construction of more workforce housing that would attract teachers and police officers who work in DC but don’t live in the city.

“We have a lot of work to do to be sure we limit displacement,” she continued, noting that when she was appointed chair of the housing committee “I did not realize the vastness of the issue. It encompasses everything from transportation, to jobs, to education even.

“It’s much more in-depth,” she added.

Her opponents don’t disagree. That’s one reason housing affordability has topped every campaign forum, and why they have collectively concluded Bonds is not up for the job. It will take more than that recognition to unseat the seasoned pol.

This rising group seems to have greater promise. Given their history of activism, if they lose, they are not likely to slink off into the sunset. Bonds and others facing future reelection bids may want to start looking over their shoulders.

jonetta rose barras is executive producer and host of “The Barras Report,” aired on the University of the District of Columbia cable television station.