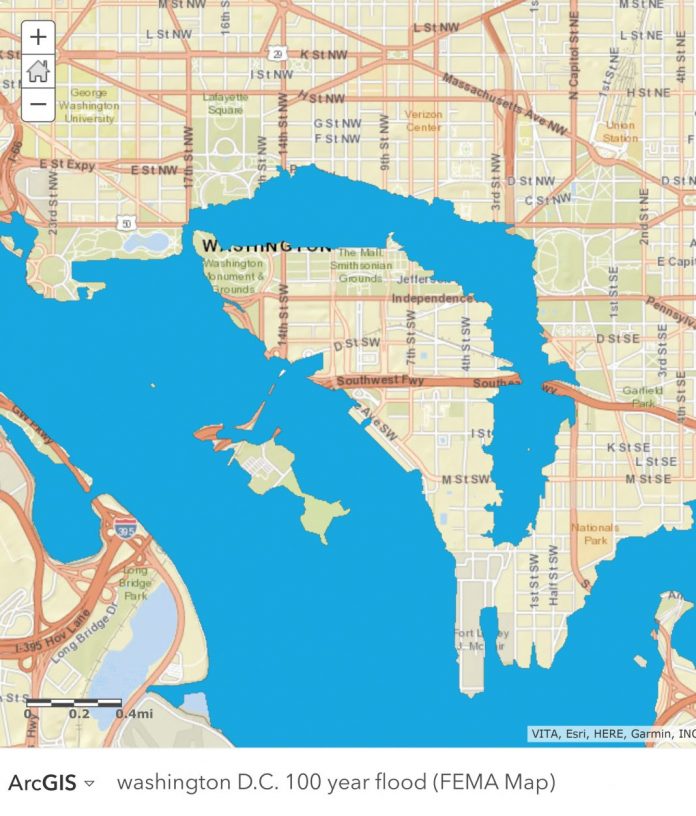 The inundation of the coast has begun. More than 86,000 miles of tidal coastline in the United States will be affected. In 2014, the National Climate Assessment organization reported that tidal waters have climbed an average of eight inches (20 centimeters) over the past hundred years because of glacial melt and the expansion of the water from rising sea temperatures. The New York Times warned on Sept. 4, 2016: “The sea has crept up to the point that a high tide and a brisk wind are all it takes to send water pouring into streets and homes.”

Houston’s inundation is a prime example of what can happen in a perfect storm of raging rivers, hurricane wind, and torrential rain. While tidal floods are often not deep, they can disrupt traffic, ruin homes and other structures, and cause power outages and pollute water supplies with sewage. Combined with urban overdevelopment, a storm of this caliber results in immense personal havoc.

Further, along many waterfronts in America the land is sinking. This process is known as subsidence, usually caused by the removal of large amounts of water from underground aquifers for industrial and public water supplies. Increased flooding is forcing many communities to make costly adaptations along their waterfronts.

Washington is not immune. The nation’s capital sits at the confluence of the Anacostia and Potomac rivers. Three buried streams cross the width of the city; and the city suffers from an antiquated sewer capacity.

In a risk-analysis report, “Prediction and Impact of Sea Level Rise on Properties and Infrastructure of Washington, D.C.” (2012), Bilal Ayyub and his associates warned that Washington will face increased flooding and eventual geographic change because of sea-level rise. Currently, they note, the lowest points in Washington, DC, are the Anacostia shoreline, the Potomac, and the Tidal Basin, which are at sea level. This constitutes practically Washington’s entire waterfront.

The most worrisome aspects of flooding in this area would be twofold: first, the loss of a major part of the city’s recreation area and public space, and second, flooding of 3.7-4.7 kilometers of railroad line, which would profoundly disrupt the transportation and distribution grid of the Middle Atlantic region.

Washington has 1,350 acres of land that lie less than six feet above high-tide line. This involves possible flooding of two local military facilities, a museum, and 1,400 residents in 400 homes.

Washington has had a distressing number of flood events, stretching from the Civil War era into the 20th century. During the period 1870-90, floods and ice freshets damaged Washington’s waterfront, destroyed boats, and stalled commerce on the Potomac. In May 1881, torrential rains flooded the waterfront and streets, creating ponds and lakes on what had been dry land. In June 1889, floods crested at 12.5 feet above flood stage, and many areas of the city were deluged with river and sewer water. Within a single day, four and a half inches of rain fell on the city, flooding Pennsylvania Ave from 10th Street to Sixth Street NW.

The worst problem confronting Washington then was that the sewers, choked by the rising waters, flooded basements with effluents.

High water continued to bedevil the capital well into the 20th century. On March 17-19, 1936, a flood surge on the Potomac broke into the city at 17th Street NW. Waters crested at the Key Bridge at 18.5 feet above flood stage. More than a thousand volunteers worked feverishly to construct sandbag dikes against the flood near the Washington Monument and along the north side of the Reflecting Pool to the Lincoln Memorial. This is the lowest point along the Mall and an area of easy penetration for floodwaters. This, the worst natural disaster in 80 years, prompted Congress to pass the Flood Control Act of 1936 to fund the construction of levees on the Mall.

A good deal of the capital is one big flood plain. The flood of 2006 inundated some of the most iconic buildings. Water backed up Constitution Avenue and flooded the Federal Triangle area. It poured into the grates of the National Archives, swallowed huge electric transformers and flooded a newly renovated theater.

The lowest point of the Mall at 17th Street and Constitution Avenue NW is at the bottom of a bowl with hills all the way around Washington. When it rains, the water flows into the bowl. Photographs from the floods of 1936 and 1942 show the Jefferson Memorial looking like a small island cut off from the District.

As in the past, Washington no doubt will occasionally be walloped by a one-two punch – rainstorm floodwaters rushing downriver out of the Potomac watershed and a hurricane rainstorm driving a tide surge upriver from Chesapeake Bay.

The Dutch, long experts in the realm of floods and tidal surges, say that it is far easier to prepare for a flood than to recover from one. This insight has been roundly ignored in the United States until just recently.

What if a Houston-like storm swamped DC? In September 2003, Washington endured a flood surge from Hurricane Isabel that raised water more than eight feet above flood stage. The World War II Memorial was designed to absorb floodwaters, and the city has levees and other structures to protect against storm surges.

The District has yet to confront all the issues of social vulnerability, a broad term that describes “the sensitivity of populations to the impacts of environmental risks and their ability to prepare for, respond to and recover from hazard events.” And global warming magnifies flood risk in areas like Foggy Bottom, the Southwest, and parts of Northeast Washington.

Despite changes in flood control measures, by the end of this century as much as $7 billion worth of property in the District will be routinely threatened. Major freeways and streets are at the water’s edge, especially along routes to Georgetown and Rock Creek parkway; 21 miles of road lie below the six-foot level.

At the eight-foot flood stage, the Washington Navy Yard, much of Bolling Air Force base, the Maine Avenue waterfront, and Fort McNair will be inundated. A flood of 10 feet would inundate 46 miles of road, four military facilities, three museums, and 12 EPA hazardous waste sites.

Climate Central estimates that the District could be facing an eight-foot flood roughly every 10 years. As things are walled or diked off or jacked up, the landscape will be very different from today.

There are several basic approaches to waterfront protection in an era of 100-year storms and tidal floods.

The first, fortification, involves erecting storm barriers with floodgates to protect key areas from engulfing tides. A wall has been built to protect the low point of the Mall at 17th Street SW from a flood surge that could curl for over two and a half miles through the heart of the city. The wall across 17th Street is a 380-foot berm nine feet high that crosses the street at a critical low point. It is capable of withstanding a flood tide of about nine feet of water but has yet to confront a perfect storm of tidal surges and torrential rains.

This area is a low point in the waterfront area and historically has been the flood point entrance to much of the Mall and central city. Most consider the wall to be an eyesore. “Plugging” a busy traffic artery like 17th Street in anticipation of rising water will no doubt engender a chorus of commuter protest.

The District of Columbia’s Blue Plains Wastewater Facility is undergoing a $13 million construction project, expected to be completed in 2021, to build a sea wall, 17.2 feet high, to protect this vital sewage plant against high tides and floods. Construction is being done in anticipation of a 100-year flood to promote resilience along the Potomac waterfront.

Other infrastructure changes can be made. Structures in the flood zone can be individually protected by putting generators and electrical boxes on the upper floors of buildings instead of in the basement. Pumps in lower floors can be placed on pedestals to avoid electrical power outages.

In the wake of the 2006 storm, the federal government created new flood plain maps to show agencies and businesses how to fortify themselves against rising tides and surges. Government agencies bordering the Mall no longer store anything that matters in their basements.

A second strategy is retreat, based on the idea of removing most habitat from the shore. Raising buildings on stilts and other contrivances is also part of this strategy. The construction of swales, small dikes, and rain gardens to direct floodwaters to pumps and storm drains focuses mostly on urban waterfronts that border inland rivers.

The third strategy is resilience. Developers and planners recognize that ultimately we can’t keep the water out. They plan to construct buildings with high setbacks and use underground cisterns to trap floodwaters. This water can be pumped to the top of buildings to energize turbines for the production of electricity.

The Wharf project of PN Hoffman, on the Southwest waterfront, for example, has a huge underground cistern to absorb flood waters. It also has fortified, raised water pumps and generators for electricity.

Along the Potomac and Anacostia waterfront, areas set aside for parks and recreation have modest swales and permit the entry of floodwater because there is no habitat that can be seriously damaged. Yards Park and Anacostia Park east of the river are good examples of this latter strategy. Areas like the Georgetown waterfront employ a mix of fortification and land-use planning to counter tidal surges, Also, the Georgetown waterfront has floodgates that can be raised to protect the restaurant and retail areas along its dock.

Is there a perfect strategy to protect our waterfronts in an age of global warming and flood surges? Of course not. Urban waterfront communities are vulnerable to the destructive powers of nature. The highest flood on record in Washington was 7.9 feet in 1933. But by 2100, Climate Central estimates the city could be facing an eight-foot flood every 10 years.

Planners point out that protecting a waterfront boils down to one key question of flood control – How much risk are you willing to accept? Can sound flood control plans surmount the political noise that distorts and confuses any program dealing with climate change in the United States?

Climate change will play a major role in the reconfiguration of our waterfronts and shorelines. Flooded waterfronts and their cityscapes are inevitable. How much damage they do will be determined by the measures that waterfront communities take.

John R. Wennersten is an environmental writer living on Capitol Hill. His recent books include “Chesapeake Bay: An Environmental Biography,” “Anacostia, The Death and Birth of an American River,” and “Washington’s Historic Waterfront.” Email him at jrwennersten@gmail.com.

The Results Are In