Phil Mendelson, chairman of the DC Council (D), recently organized a “meet up” at the Firehook Bakery on Pennsylvania Ave. SE. He hasn’t held a formal re-election kickoff, but no one could be blamed for thinking the gathering at the Ward 6 eatery a political event. A couple of staffers wore T-shirts from a previous campaign and Mendelson held court for at least 90 minutes. He displayed an encyclopedic knowledge of the government, as residents asked questions ranging about everything from parking restrictions and Airbnb regulations to illegal construction, alley maintenance, school modernization, and small business retention.

“He is the consummate politician,” said Stan Jackson, head of the Anacostia Economic Development Corporation in Ward 8. Most people perceive the city’s seventh Council chairman as a political misfit.

Tom Lindenfeld, a political consultant, compared Mendelson with now deceased North Carolina Senator Sam Ervin, who became legendary during the Watergate hearings for his intense questioning of witnesses and who often described himself as a country lawyer.

Mendelson doesn’t have a southern drawl; he’s from Ohio. Still, the persona he has adopted may be as theatrical as Ervin’s.

“You don’t get to be one of the most powerful politicians in the city by being a bumpkin,” continued Lindenfeld. “People who underestimate Mendelson do so at their peril.” 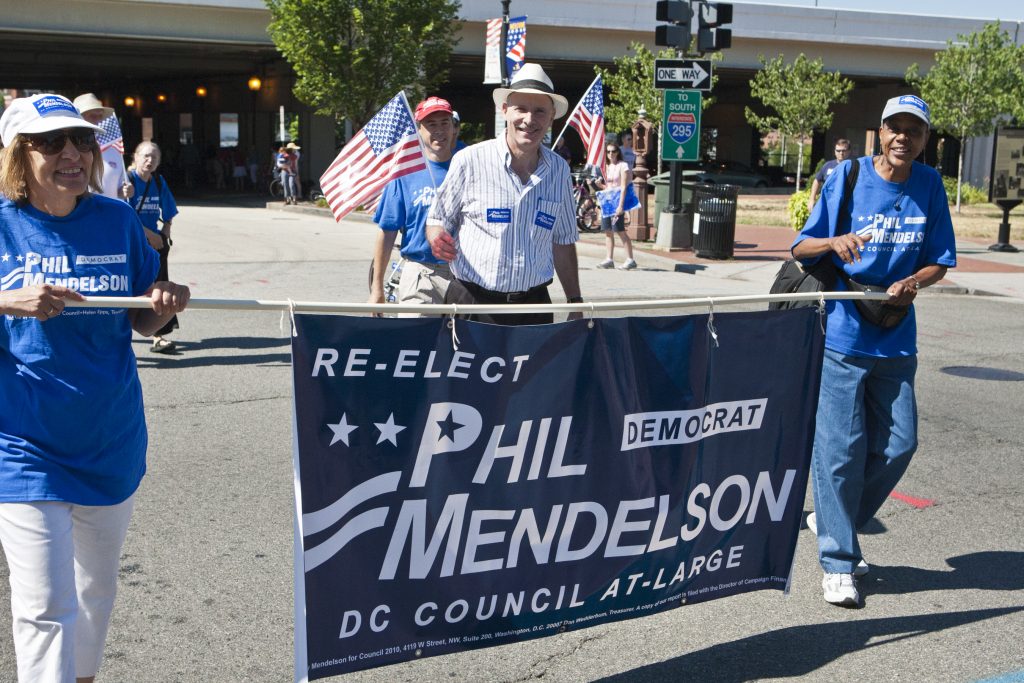 Asked during an interview at his office in the John A. Wilson Building whether he agreed with those descriptions, Mendelson demurred. “I’m not the typical politician who wants to brag. We’re elected to get things done in the public interest. I try to keep that in mind, so it’s not about me.”

Not everyone has flattery for Mendelson, however. Ward 1 activist Terry Lynch said Mendelson has not been a good leader of the legislative branch. “I don’t see the Council chairman moving the city forward,” declared Lynch. He called Mendelson’s tenure “undistinguished” and without any “definitive hallmark achievement.”

“Thank God for the small business entrepreneurs and activists, they have driven the city’s success,” added Lynch.

Another political operative accused Mendelson of being stubborn and possessing a “desire to command everything. He doesn’t see lines between the executive and the legislature.”

Mendelson countered that when he took over as chairman the Council was “in extreme decline.” Two members had pled guilty to federal felonies and a third would be arrested on bribery charges. “I think the Council has rebounded.”

As for the vision thing, as leader of the legislature Mendelson is focused on ensuring the institution has the public’s trust and works well as a unit. “This Council wants to grapple with protecting and promoting diversity, affordability, and quality education,” he added, which may not be presented as a typical vision but clearly provides the legislature’s priorities.

“I do think Chairman Mendelson has evolved as a politician,” said At-large Councilmember Elissa Silverman (I), recalling the occasion years ago when her Washington City Paper colleague Erik Wemple plastered Mendelson with the odious title of “staffer Phil.”

“But I saw Phil recently wearing one of those Robert White pocket squares,” Silverman added jokingly.

From Staffer to Somebody
Before Mendelson was a staffer, he was a Ward 3 activist. During those days, he helped rescue McLean Gardens from the wrecking ball. In 1978, he was elected an advisory neighborhood commissioner. Later, he served as aide to Ward 3 Councilmember Jim Nathanson (D) and then-DC Council Chairman David Clarke (D). From those various vantages, Mendelson gained mastery over the arcane and the mundane: rules, bureaucratic regulations, zoning minutia.

Unsurprisingly, in 1998, he ran for a seat on the Council, winning the Democratic nomination by a mere 17 percent. Over the years, he has morphed into one of the highest citywide vote getters. In 2010, for example, he earned 77,127 votes in the Democratic Party primary; the only person with higher numbers was Congresswoman Eleanor Holmes Norton (D), who had 116,277 votes.

During his tenure on the Council, Mendelson has worked on everything from the creation of the Department of Forensic Science to implementation of gun control, from the prevention of human trafficking to the creation of an elected attorney general, as well as the establishment of budget autonomy for the District, marriage equality, and tax reform.

“After 20 years I am still accessible. I can get things done,” said Mendelson, offering that evaluation in an emotionless voice, underscoring the impression of him as professorial and wonkish.

Those non-threatening traits persuaded his colleagues to select him in 2012 as interim chairman, after Kwame Brown stepped down from the position prior to pleading guilty of a federal felony. “The crown jewel was the ascension to the chair, think about how Mendelson maneuvered that,” said Jackson. In 2014, Mendelson won the Democratic Party primary, bringing in 69,138 votes in his bid to serve a full four-year term as chairman. He sailed through the general election. 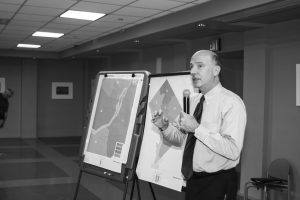 Control Freak or Facilitator?
“He’s coming into his own as chairman,” said DC Auditor Kathleen Patterson. Patterson, who formerly represented Ward 3 (D), citing as an example Mendelson’s handling of the controversy surrounding Mayor Muriel Bowser’s (D) plan to close DC General as a shelter for homeless families and construct or rent smaller facilities in the city for a similar purpose. That original mayoral proposal drew fire from District residents who argued variously that they hadn’t been consulted and that Bowser’s plan was a boondoggle for developers.

“It was fun to see Phil be a powerful policymaker and be political,” continued Patterson. “He is a pretty adroit politician.”

Ultimately, under Mendelson’s leadership, the Council approved a bill that shifted the location of a couple of shelters and ownership of the facilities from private developers to the government. Those alterations earned him an expletive from Bowser, which became the talk of the town for weeks.

Beverly Perry, senior advisor to the mayor, brushed aside that history. “The mayor and Phil meet every week. Just like in any other family, they have their spats but they continue to meet and to work in concert to keep this city moving ahead.” Mendelson echoed those same sentiments, refusing to extend the discussion about him and Bowser beyond that.

“The thing about Phil I admire is he is for getting things done. He is not one of the people who wants to study things to death,” continued Perry.

Mendelson’s handling of the homeless controversy may have been deft – not so much with other issues, said some advocates and government insiders. He has been roundly excoriated for what some described as his control-freak tendencies. “Committees in places like Maryland and Virginia are truly empowered. Committees are not empowered here,” said one government official.

“As chairman, he knows the rules of this Council better than anyone, and when you know the rules you have a lot of power. Phil has been able to maneuver because he knows the rules,” said Silverman, adding that she started carrying her “rule book to each legislative session.”

“I think my style is confusing to outsiders. How can you be Machiavellian if you’re low-key?” countered Mendelson, without a hint of facetiousness in his voice.

The case against him may be his handling of the Universal Paid Leave Act (UPLA). The bill, originally introduced by Silverman and At-large Councilmember David Grosso, established a new tax paid by local businesses to help provide benefits for workers in the private sector. To surprise of proponents, Mendelson referred the legislation to his Committee of the Whole which he controls. He took months before finally bringing final legislative proposal for a vote. His bill modified benefits and reduced the tax that would be levied against businesses. Shortly after passage of that version of the UPLA, Mendelson and others introduced legislation to change how the law is funded, delaying its implementation.

Silverman objected asserting the change in financing could negatively affect the benefits package. “Mendelson has said he likes to be a moderating influence,” she continued, explaining that early in his tenure he was on the left. “Now that the Council is more to the left, he has moved more toward the business community.”

Mendelson defended his actions, noting the business community and Mayor Bowser had serious concerns about the new tax. “It’s worth looking at whether we can improve the financing mechanism.”

“One of the challenges in working with Phil is that he keeps his own counsel. He keeps his cards close to his vest. That makes it difficult to get closure,” explained Patterson.

“As chairman of the Council, I have to be mindful of how we get to majority vote. That means finding the balance that works,” said Mendelson

He may have created a permanent enemy, however. Political insiders said Grosso is considering a run for chairman. Grosso declined to be interviewed. He also did not respond to my question, submitted to his spokesperson, asking him to confirm or deny reports of such a move.

Interestingly, just as the Council was returning from its summer recess, Mendelson and Grosso got into a disagreement over the DC Public Schools teachers union contract, according to Wilson Building insiders. Grosso wanted to introduce it as emergency legislation, Mendelson resisted, although he supported the agreement. Folks knowledgeable about the dispute said the chairman used it as a teachable moment.

There could be some truth to that assessment. When I asked Mendelson to compare his style with that of previous chairmen, he said he is closer to Linda Cropp (D), describing her as “collegial and collaborative. But, she could also bring down the hammer. I’ve been counseled that’s the way to do it,” he added.

“There is a unique strategy to Mendelson’s style that is not always confrontational but also not always kind,” said Jackson. “Most politicians operate under the edict that says, ‘Cut me and I’m going to cut you deeper.’ Phil is going to cut you – just not at that moment.”

A Man of Principle
Truth be told, most voters aren’t focused on process. They have embraced Mendelson’s well-crafted persona, becoming comfortable in their 20-year political marriage. What strikes them as most important is what was on display at the Firehook: integrity, commanding knowledge of government, a willingness to listen, and honesty. Even when he doesn’t tell them what they want to hear, they trust him.

“He’s incorruptible,” said Ward 7 resident John Capozzi, who once ran against Mendelson but is now a staunch supporter. “Typically, there’s been a pay-to-play culture, and Phil just has not been involved in that. Phil has his own compass of what he wants.

He meets with lobbyists but is not focused on them when he makes a decision.”

Eboni Rose Thompson, a Ward 7 education activist, has “appreciated when he’s stepped in to make sure the Council is a good check to the mayor. I think that is pretty responsible.” There are character flaws she admitted, but those are somewhat trivial. “I think he is more of a worrier. He gets into the weeds. He probably chews on some things too much.”

Disputing Lynch’s argument about Mendelson’s failure to sparkle, Thompson said, “The Council chairman is like an orchestra leader; it’s not necessary for him to distinguish himself.”

Mendelson asserted there are good reasons to “re-hire” him, including his management of the Council. “I am thoughtful, so if you, the voter, feel strong about something, unlike many, I will listen. My legislative accomplishments show that I can get things done. My record clearly indicates I care about affordability, equity, and the kind of values to ensure diversity and opportunity.”

That documented record, even in a changing Washington, DC, likely is enough to win re-election. Predicted Silverman: “Phil’s seat is pretty safe.”

Wrong Choices in the DC Budget