Born before their first biological son, it is the eldest of three coffee shops. A Logan Circle location preceded their next son, and a Union Market location was opened prior to the birth of their third child.

The Jensens are now co-parenting their latest coffee child, a roastery, with head roaster Evan Howe. “We felt like, in the city, the time was ripe for a local roaster that was doing what we wanted to do,” said Ryan Jensen.

“Starting Small Planes has been exciting but challenging,” added co-founder Jill Jensen. “I am very pleased with the coffee that we have been able to source and how we are roasting it. I am not a coffee nerd like Ryan and Evan, but I am a coffee snob. At this point I only drink drip coffee, brewed at home because I am with my three boys.”

Small Planes
It is called Small Planes coffee, and Ryan Jensen explained that the name emphasizes the ways in which coffee links people in both the global coffee economy and local communities. “Often you’re dealing with people who are on different planes, and it’s kind of about connecting those people and shrinking the distance between us,” he said in an interview at the T Street NE roastery.

Small Planes operates as a separate company from Peregrine. Jensen and Evan Howe say that although Peregrine is currently Small Plane’s only customer, they expect that will change and are already looking to partner with other great companies in the District. “We’re really happy with the current status quo, but we want to leave avenues open for different partnerships down the road,” Howe said.

Tight Turnaround, Big Space
It is a small roaster in a big space. “We feel so grateful that we have this space to grow into, because I have friends that have opened roasteries in Brooklyn or whatever and it’s just tiny, and they have major problems related to not having basic operational space in their first month,” said Howe, who has been a Peregrine barista at both the Union Market and Capitol Hill locations.

In June, within hours of having the business license sorted, Jensen and Howe roasted their first bags of Small Planes coffee, dropping them off at Peregrine shops the next day. They roasted four different coffees over the next six weeks.

Jensen said that typically shop managers at the Peregrine cafes place orders on a Sunday, and Howe roasts on Monday and delivers on Tuesday. Orders are then placed Tuesday evening to be delivered on Wednesday, a tight turnaround that ensures coffees meet high standards for freshness. Said Howe, “We don’t sell any coffee at Peregrine that’s more than two weeks from the roast date.”

Sharing the Shelf
Small Planes will not replace Counter Culture coffee, which Peregrine has prepared and sold retail in the shops for the last nine years. Jensen, who worked for Counter Culture for a year and a half, emphasized the amazing quality of coffee coming from the Durham, N.C., roaster. He said that Counter Culture is “buying beautiful coffee from a long-lasting relationship that they can say is sustainably grown, is sustainably purchased, and it tastes beautiful.”

Jensen and Howe see the two coffee labels as complementary, and a continued partnership with Counter Culture as a way to fulfill their own vision. “We definitely have our own style regarding the types of roasted coffee that we really enjoy and the types of flavors that we try to chase after in a cup of coffee or a shot of espresso,” said Howe. “But we feel like their coffee works well with ours, we’re proud to be on the shelf with them. It allows us to say, let’s be reasonable about how we’re doing this rollout and to focus on only a few things and do them really, really well.”

Fingers In
In the 19th year of his own career in coffee, Capitol Hill store manager Jeremy Sterner said that the progression to roasting is logical for people as immersed in coffee as the Jensens have become. “You can put more of your love in it,” he explained.

“That’s what I mean when I say ‘owning the process,’” said Jensen. “Not in terms of business ownership but more that I want my fingers in it. I want us as an extension of Peregrine to be more involved in that supply chain.”

Small Planes wants to build relationships directly with the producers. In January, Howe went to Antigua, Guatemala, to taste and select coffees. Howe also met the farmers who grow the coffee and others who are involved in production.

They are working with a small importer called Collaborative Coffee Source, which allows them to build those kinds of relationships. “They know us, know our values, and we’re trying as much as we can to just stick to that and not take the easy path,” noted Jensen.

Entering the large, complex coffee economy is a challenge. When Jensen and Howe determined that they could open in May, their importer suggested that they begin shopping for coffees in January. “We had to jump in in the midst of the year, and kind of get into the cycle. Because for a lot of our coffees, we’re caught having to contract those futures five or six months in advance.”

Even though they placed their initial orders in January, they did it just in time. The coffees that Howe selected in Guatemala did not become available until late April, just a few weeks before Small Planes was ready to start roasting. An Ethiopian coffee they selected in February only arrived in the United States in early July.

Being part of the supply chain is one of the best ways to affect flavors, together with roasting, Howe said. “On one hand, we are absolutely making decisions which are going to affect how that coffee tastes in our shops, but on the other hand, it’s such amazing seasonal produce that it makes us look good.”

The quality is part of Jensen’s backstory. For three years, he was a manager at Murky Coffee, Nick Cho’s coffee shop located on the present site of the Capitol Hill Peregrine, before leaving to work for Counter Culture.

It was Cho who prepared the cappuccino that became Michaele Weissman’s “godshot,” the moment of coffee perfection which she chased throughout her 2008 book “God in a Cup.” When Murky closed, the Jensens decided to put their hearts into their own shop, and that is when Peregrine was born.

Weissman’s book is referenced by Jonathan White, a self-identified coffee aficionado who started coming to the Capitol Hill shop seven years ago. He has embarked on what he calls coffee pilgrimages throughout his travels, chasing his own godshot. He returned to Capitol Hill a few weeks ago after living the last two years in The Hague, and he says that Peregrine is a unique place. “The people here don’t realize that they’re making some of the best coffee in the world, and they’re doing it every day,” he told me.

His favorite Small Planes coffee is the Gichatta-ini, from Kenya. “That’s a mind-blowing coffee,” he declared.

Jensen says they felt a little pressure when they first roasted the Kenyan coffee. White’s favorite coffee sells retail for $22 a pound. To ensure quality control, Jensen, Howe, and cafe staff subject every roasted batch to a cupping, a tasting ritual using guidelines and nomenclature established by the Specialty Coffee Association of America.

“We want to make sure it’s very delicious,” said Howe. “And good news: It is.” 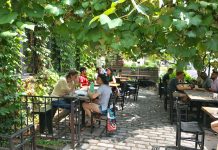