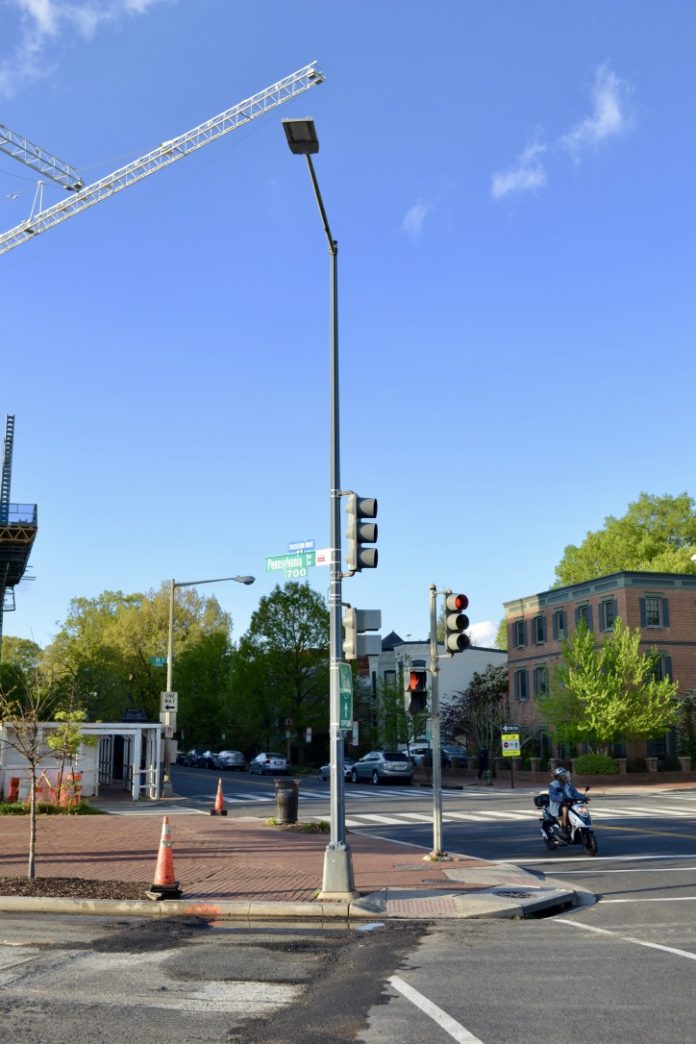 The District Department of Transportation (DDOT) has been looking into a citywide conversion of streetlights from the familiar orange glow of high-pressure sodium lights to the blue of light-emitting diodes, or LEDs. Some conversions have taken place, and residents are seeing red – or in this case, blue.

DDOT Director Leif Dormsjo says that of the 70,000 streetlights in the District, roughly 5,000 have been converted. Most of the conversions have occurred during maintenance and replacement or through streetscape projects done by the department and by private developers.

LED lights have many advantages, said Dormsjo. They are more energy efficient and have fewer maintenance costs because they have a longer life – between 15 and 20 years. They can also be centrally dimmed, allowing for customization in different settings. However, a June 2016 report by the American Medical Association (AMA) has raised some concerns. LED streetlights produce more light in the blue part of the light spectrum than the high-pressure sodium streetlights they replace, according to the report. Blue spectrum light not only causes more glare, which can be a visual hazard while driving, but is also associated with disrupted sleep cycles, impaired daytime functioning, and obesity.

LED light bulbs are labeled with a correlated color temperature, or CCT. CCT is measured in degrees Kelvin (K), and this temperature rating is linked to the tone of light that is emitted from the fixture. As the CCT increases, light color moves from yellow to white and then to a bluish-white.

The units installed to date throughout the District are rated 4,000 or even 5,000 Kelvin units. That is the industry standard, says Dormsjo, because “it provides the best sight-detection distance for motorists and pedestrians, meaning it gives an individual the greatest amount of advance notice of something that’s ahead of them or coming toward them.” He calls LED lights “the safest light to put into a roadway environment.”

However, District residents are wondering whether the potential harm outweighs the benefits. “It is key to choose the right ones,” said Delores Bushong, who together with a concerned coalition of residents is a founder of the Streetlight Task Force. “We are concerned about the health impacts. I don’t want to live with these lights on my street until the [plan] is complete.”

The Streetlight Task Force has called for a moratorium on the installations, citing the Office of Contracting and Procurement (OCP) policy directive that states, “Agencies and contractors shall use Environmentally Preferable Product and Services (EPPS)” or products with the least effect on human health. She was told it was inapplicable in this instance.

Cities such as Phoenix that previously installed 4,000 Kelvin streetlights responded to the AMA report and public concerns with a full retrofit of 2,700 Kelvin units. “At this point [DC] has not done a good job of looking out for our health,” Bushong said. “The same way it happened in Phoenix, we expect our city to respond to our concerns.”

Said Elizabeth Nelson, president of the Capitol Hill Restoration Society, “Given the potentially serious health risks posed by high-Kelvin street lights – to say nothing of the environmental concerns – it’s difficult for me to understand why DDOT would propose using them.” She added, “It’s my understanding that safer lights are equally available and roughly the same price.”

Dormsjo says that the department reached out to the AMA when the report was published and was told that the objective of the report was to bring attention to the issue of light pollution and the possible public health impacts associated with CCT, mainly some of the blue light spectrum. “But the report was not intended to be, nor does it function as a kind of a final word on LEDs as a worthwhile technology.”

There has been criticism of the AMA findings. Researchers at the Lighting Research Center (LRC) at Rensselaer Polytechnic Institute argue that the AMA oversimplified the effects of LED lighting. They claim that CCT is not an appropriate way to characterize impacts of light on human health because it is not linked to other important factors in light exposure such as amount, duration, and timing. The LRC is sponsored by both Philips Lighting and the National Cancer Association.

“I’m sufficiently concerned that there may be some issue that I want to have a hearing about it,” said Ward 3 Councilmember Mary Cheh, chair of the Committee on Transportation and the Environment. She has scheduled a public roundtable on the Streetlight Modernization Project for May 3. “We need a full and complete hearing so that we can make some determination about this.” She added that there is time for further consideration, as the contract for full conversion has not yet been awarded.

Dormsjo said that DDOT is very supportive of the hearing. “We’re anxiously preparing for the meeting, and hope that the community members have a chance to participate not just in terms of providing testimony but also listening to the folks who have expertise in this area.”

The public roundtable on the Streetlight Modernization Project takes place at 11 a.m. on May 3 in Room 123 of the John A. Wilson Building, 1350 Pennsylvania Ave. NW.