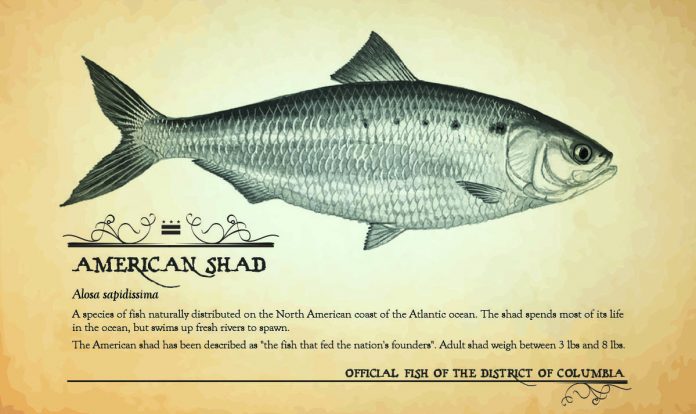 Importantly, the act authorizes the mayor to impose penalties on persons who knowingly transport or trade in certain invasive plants and nonindigenous species. “As the nation’s capital, we need to lead the way when it comes to preserving our environment, and part of this work includes protecting our important local wildlife and precious natural ecosystems,” said Mayor Bowser. “Today, we are taking another step to ensure that our natural habitats are protected for residents and future generations to enjoy.”

Mayor Bowser used the signing event, which took place along the banks of the Anacostia River, to unveil two new DC “state” species, designating the American shad as the District’s official fish and Hay’s Spring amphipod the official amphipod. Both species play an important role in DC’s natural history.

According to the Interstate Commission on the Potomac River Basin, the American shad (Alosa sapidissima) is a member of the herring family that spends most of its life at sea and returns to its natal river to spawn. Historically the shad run provided a tasty and important food source during spring, when other foods were often in short supply. Shad was one of George Washington’s favorite foods. Overfishing and poor water quality reduced the stocks, but restoration efforts have enabled the Potomac’s shad population to recover somewhat. Per the Atlantic States Marine Fisheries Commission’s (ASMFC) Fishery Management Plan, the harvesting of shad and river herring is prohibited.

The Hay’s Spring amphipod (Stygobromus hayi) is one of three amphipods unique to the District and has been found in Rock Creek Park. According to the Fish and Wildlife Service, the little crustacean measures less than a half-inch long and spends its life underground. Its presence is an indicator of good water quality.

While having a DC state fish and amphipod are conversation fodder, the Fisheries and Wildlife Omnibus Amendment Act does much more. At a time when the federal government is sending signals that it will be relaxing environmental regulations, this amendment strengthens the District’s ability to enforce and regulate environmental laws, especially along rivers and creeks. Tommy Wells, director of the DOEE, stood with the mayor as she signed the legislation. “The DC Fisheries and Wildlife Omnibus Amendment Act is a sign to District residents and the nation that we treasure our natural resources,” he remarked. “It allows us to promote and regulate fishing while also providing us with the ability to levy penalties on those who introduce non-native species that can harm our wildlife (like the snakehead) or do anything to harm our waterways. This is a good bill whose time has come.”

As the health of the Potomac and Anacostia rivers has improved, fishing has become a more popular sport. A fishing license is required for anyone between the ages of 16 and 65 and can be obtained online for a $10 annual fee for DC residents. Due to the residual presence of polychlorinated biphenyls (PCBs) and other contaminants, DOEE has published an advisory for the consumption of fish from DC waters, http://doee.dc.gov/service/fishing-district. Catch and release is encouraged.

Have you checked out either of DC’s rivers lately? Spring is a great time to see them in all their ever-improving glory.

Catherine Plume is a lifelong environmentalist, a writer, and a blogger for the DC Recycler: www.DCRecycler.blogspot.com; Twitter @DC_Recycler. She is also a board member for the DC Chapter of the Sierra Club.